A leaked homologation document reveals a more powerful Bajaj Chetak in the works. Bajaj Chetak is an electric avatar of the iconic petrol-powered scooter, the Chetak, that helped mobilize millions in India.

The electric scooter was initially launched at Rs 1 lakh (ex-showroom Pune and Bengaluru) for the base variant. However, after subsequent price hikes, it now retails at Rs 1,47,691 (on-road Pune, including FAME II and state subsidies). Bajaj currently offers the Chetak only in one variant, called Premium.

The Chetak’s headlight, tail light, and turn signals feature LED units, while the instrument cluster is a fully digital LCD unit. The electric scooter also gets smartphone connectivity, with the Internet Of Things (IoT) to notify the owner if the scooter is tampered with or if it does not charge properly. You can also check the scooter’s location, charge status, and remaining range using this feature. That said, there’s no turn-by-turn navigation on the console.

Powering the Chetak is a brushless DC motor producing a peak power of 4.08kW, and a maximum torque of 16Nm. With a 60.3Ah lithium-ion battery pack, the scooter offers a claimed range of 95km in ‘Eco’ mode and 85km in ‘Sport’ mode. It can be fully charged via a conventional 5A power socket in five hours, while a 25 percent charge can be achieved in just an hour. Bajaj provides a 3-year or a 50,000km warranty (whichever is earlier) on the Chetak, including the battery. Its battery life is claimed to last around 70,000km, while its service interval is every 12,000km or one year.

Up front, the scooter features a single-sided suspension like the Vespa, and the rear gets a monoshock. There’s a disc brake at the front and a drum unit at the back. 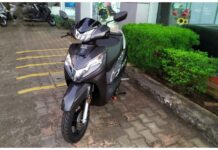 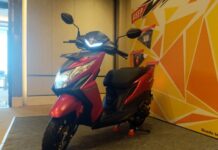 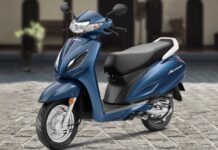