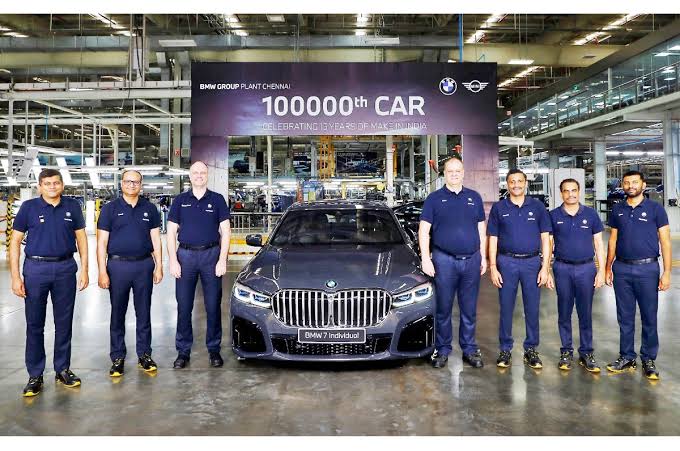 From its manufacturing facilities in Chennai, Tamil Nadu, BMW Group India has built its one millionth vehicle. One of the 13 BMW models assembled in India is the milestone car, a BMW Individual 740Li M Sport Edition. Other models produced locally include the 2 Series Gran Coupe, 3 Series, 3 Series Gran Limousine, M340i, 5 Series, and 6 Series Gran Turismo, in addition to the 7 Series. The BMW X1, X3, X4, X5, X7, and MINI Countryman are among the SUVs.

Thomas Dose, Managing Director, BMW Group Plant Chennai, stated of the new milestone, “This accomplishment is a result of the team’s hard work, efficiency and consistency which ensures that every BMW or MINI car locally produced here in Chennai is of the same international quality standards as any other BMW plant across the world.” He further stated, “Increased localisation of up to 50 per cent and a robust collaboration with local supplier partners has created more value for everyone in the ecosystem. BMW Group Plant Chennai looks forward to raising the bar in sustainable manufacturing excellence further as the India story grows.”

The 2022 X3 SUV was the most recent addition to company’s India’s line-up of domestically made vehicles. The petrol model was released first in January 2022, followed by the diesel model in February. The X3 now has a more current exterior, giving it a sportier image. The revised and wider kidney grille, flatter headlights, and new front apron give the car a more substantial appearance. The adaptive LED headlights are now available. Moving backwards, the car receives complete LED taillights with a black border for a more accurate appearance. There are currently around 650 workers working for the BMW Group India.