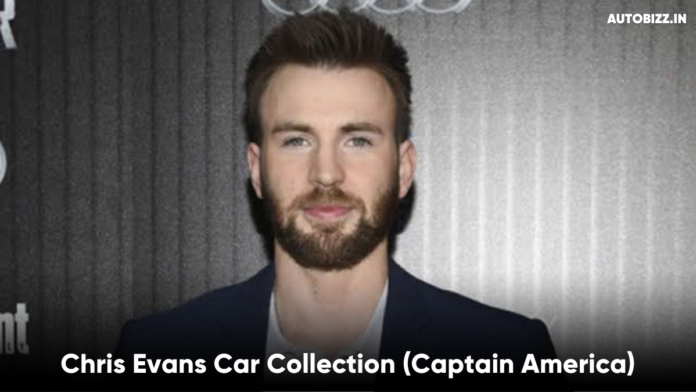 Chris Evans aka ‘Captain America’ car collection has amazing cars including Lexus ES 350, Audi A8L , Chevrolet Suburban, 1967 Chevrolet, and many more. His net worth is $ 80 million.

Chris Evans is an American actor who is famous for playing ‘Captain America‘ in marvel Studios’s ‘Avenger‘ series. He first appeared as Captain America in ‘Captain America: The first Avenger’ in the year 2011. This also the first movie in Marvel’s Avenger series. He is a very tall smart and intelligent personality in Hollywood.

Steve Rogers is the name of Chris’s character in Avenger. Chris Evans appeared in almost every movie of Avenger. He has done 11 movies of Marvel. Though it’s a fictional character, you all know the story and craze of ‘Captain America’ in the film universe. He also has acted in many films and series His acting carries started from TV series.

It looks like Steve likes to play Fictional characters because also look super cool and real in Fantastic Four – also a fictional story. His real name is ‘Christopher Robert Evans‘.Captain America is loyal to his love in the last part of Avenger, so his car to him Steve Roger has royal cars in his garage.

let’s dive into his garage to find out his cars!!!

Chris Evans spotted many times with his dates roaming around. Chris’s personality suits this car or car suits personality whatever he looks amazing with this white beautiful Lexus ES 350. Technical specifications and features are explained below.

Lexus ES 350 is a simple but brilliant piece of engineering and ergonomics. It has a seating capacity of 5. The Lexus ES 350 comes as a 3.5-liter petrol engine producing 302  BHP along with 8-speed automatic transmission. It costs around $ 40,000.

You often seen him at airport with this Audi A8 L. It is also the one of Hollywood’s celebrities favorite car. Chris Evans is no exception to this fact. Christopher always try to fit in every character. so this car is also perfectly fits to his character.

The Luxurious Audi A8L is another one of the luxury cars in the garage of Angelina Jolie. Its presence speaks for luxury and elegance. The ‘L’ in the model name stands for its extended wheelbase, providing extra comfort and luxury over the standard A8 model. The car uses a supercharged 3.0-liter V6 engine that produces up to 333 Horsepower.

Who doesn’t love Audi R8? Captain also loves to ride Audi R8. It is a coupe-type car. Available in convertible and Coupe. Its fan following or craze level is beyond any car in youngsters or celebrities around the globe. We have seen this car steered by Chris Evans.

Fame and glamor are earned in only one way that is hard work and dedication. For a hardworking man, this Chevrolet Suburban is a blessing and definition of relaxation and comfort. Many stars need to travel to many cities and hectic schedules make them tired. So, this car is a better option for many reasons for many stars.

1967 Chevrolet Camaro is gifted to one of the famous old age sport utility vehicle and it is vrery special for captain America or Chris Evans for many reasons because it is gifted to him by the no other superstar the great Robert Downy Junior. He is also one of the great superheroes of Marvel Universe you all know that. It is a special version only one made model only for Captain America. It has Captain Merica’s Shield carved on the steering wheel.