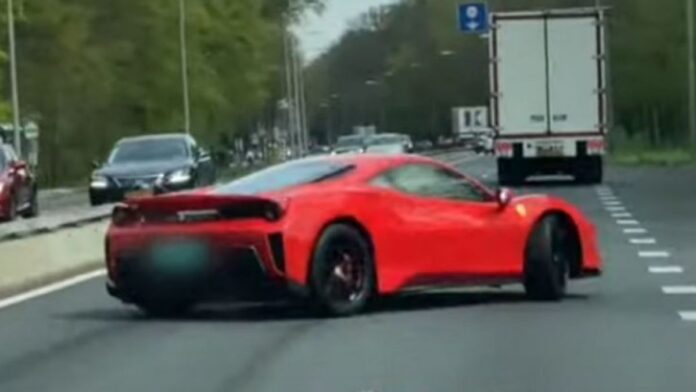 After a recent collision in the Netherlands, there is one fewer Ferrari 488 Pista on the road. Sadly for the motorist, the accident was captured on videotape.

The hardcore Ferrari supercar is seen going down a two-lane road with a vehicle recording the driver from behind in this video provided to YouTube by user’mrexumas.’ The driver can be heard moving down the gears and pushing the Ferrari’s throttle, maybe in an attempt to impress people in the car behind him or simply for their own delight.

The 488 Pista is powered by a 4.0-liter twin-turbocharged V8 that produces 710 horsepower. That’s a lot of horsepower, especially if you’re a new driver. The Ferrari’s back tyres lose grip almost instantly as the throttle is pressed down, and the car begins to slip to the left. The driver is unable to control the slide and balances the throttle, so he overcorrects, pushing the 488 to the right. It then bangs into a steel fence on the side of the road after sliding up a curb and into a patch of grass.

The fact that the automobile was supposedly only a day old at the time of the incident makes matters much worse.

We don’t know how much damage the car experienced in the incident, but when it jumped the curb, it inevitably suffered major wheel and suspension damage, as well as heavy damage to both the front and back fascias.

Read more: Nissan GT-R With Rare $20k Bodykit Smacks Into A Tree After…