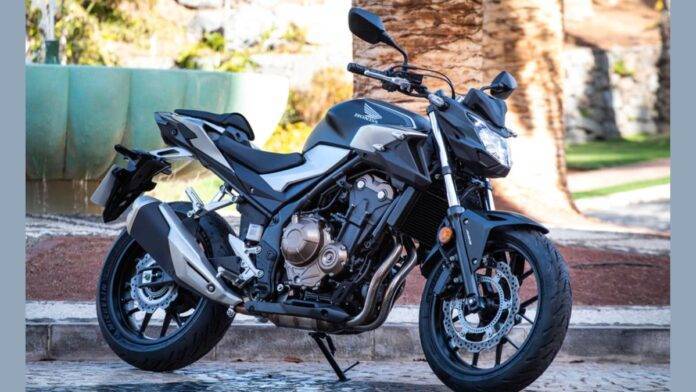 Honda debuted the 2023 Honda CB500F at the recent EICMA show in Milan, Italy. The CB500F is one of three new Honda 500cc motorcycles, along with the CBR500R and CB500X. The latter is based on the Honda CB1000R. Because this is the naked version of the CBR500R, we expect it to be much more affordable than its faired sibling.

The CB500F is powered by the same 500cc twin-cylinder liquid-cooled DOHC engine that powers the CBR500R and CB500X from 2013. The bike also has Programmed Fuel Injection (PGM-FI). The engine produces 47bhp and 43Nm and is mated to a 6-speed manual transmission. The front suspension consists of a 41mm fork with 4.8 inches of travel, while the rear suspension consists of a Pro-Link single shock with nine-position spring preload adjustability.

Honda equipped the CB500R with twin-piston callipers clamping on a single 320mm wave disc up front and a single calliper 240mm disc down back. Honda has given it a 17-inch rim with 120/70 front and 160/60 rear tyres. With a kerb weight of 190kg and a seat height of 30.9 inches, this motorcycle is suitable for a wider range of riders. ABS is optional in this motorcycle, as it is in its other new 500cc siblings. The bike is available in two colours: black and pearl white.

The tapered handlebars improve feel and leverage, while the slightly rear-set footpegs and split seat provide a comfortable riding position. Aside from the standard trove of information, other notable features include an LCD instrument console with shift-up and gear position indicators. All of this will remain the same in 2022.