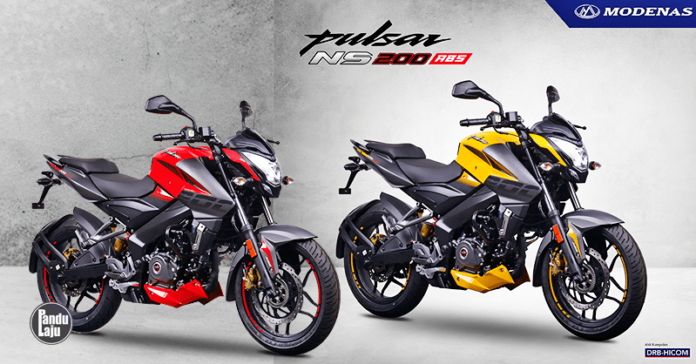 A BS6-compliant 199cc liquid-cooled single-cylinder engine powers the vehicle. This motor produces the same amount of power and torque as the previous one (23bhp and 18Nm) and is mated to a six-speed transmission. It has telescopic front forks and a preload adjustable rear monoshock. The braking system includes a 280mm front disc brake, a 230mm rear disc brake, and single-channel ABS.

The Bajaj Pulsar NS200 is listed ahead of the Pulsar 220F. The naked motorcycle gets three new dual-tone paint schemes to distinguish itself from the older model: Burnt Red, Pewter Grey, Satin Blue, and Metallic Pearl White.

The Pulsar NS200 receives a two-tone paint job as well as new graphics. The semi-digital instrument cluster is easy to read and use. It also includes a shift light beacon, as well as other standard readouts such as a side stand indicator and a high-temperature warning lamp. While the build quality on the NS is admirable, there is still room for improvement. The bike receives three new paint options that update its appearance. You also get funky wheel rim graphics that match the bike’s colour scheme. The NS now also has a belly-pan fairing.