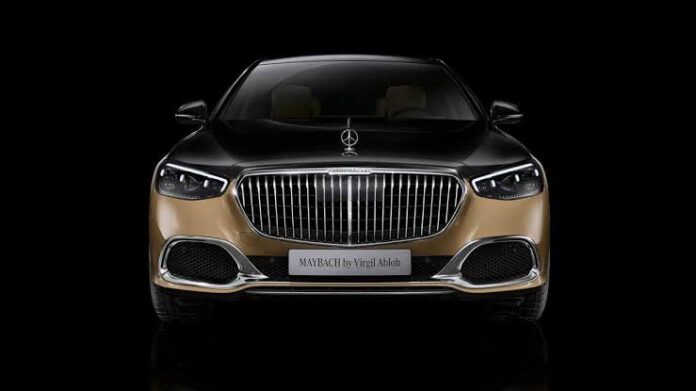 Mercedes-Benz has unveiled the limited-edition Maybach S-class, which was created in conjunction with famed fashion designer Virgil Abloh. The limited edition Maybach is based on the fully equipped S 680 and includes an exterior paint finish that was last seen on the Project Maybach concept from late last year and is restricted to only 150 units. Along with new visuals for the MBUX system, the interior receives trims and accents that match the outside colour scheme. Prior to his tragic death in 2021, the fashion designer signed off on the limited-edition Maybach.

Starting with the exterior, the Maybach S 680 is inspired by last year’s Maybach concept, which was created in collaboration with Virgil Abloh. The S 680 special edition has a two-tone paint job, with the bottom half – including the distinctive forged alloy wheels – in sand and the pillars, bonnet, roof, and bootlid in black.

The black and sand colour palette continues inside, with Napa leather used extensively on the dashboard, steering wheel, doors, and seats. Special Mercedes-Maybach and Virgil Abloh badges may also be found on the dashboard, headrests, and rear seat cushions. The limited-edition S680 also has a customised MBUX system interface, complete with distinctive aesthetic accents.

The S 680 is driven by a 6.0-litre twin-turbo V12 engine that produces 603 horsepower and 900 Nm of torque. A custom-made wooden box covered in sand-colored napa leather is included with each S 680 by Virgil Abloh. A 1:18 scale copy of the S 680 by Virgil Abloh, as well as two seats of keys and a carabiner hook, are included in the package. A special vehicle cover with Mercedes-Maybach and Virgil Abloh branding is also included with the limited-edition S 680.

Gorden Wagener, Chief Design Officer Mercedes-Benz Group AG, stated of the project, “I’m incredibly proud of the work we have created in collaboration with Virgil. From Project Geländewagen, which set the benchmark for fashion/automotive collaborations with our iconic G‑Class, to Project MAYBACH which brought the distinguished Mercedes‑Maybach heritage into the future, together with Virgil we truly broke new ground. The limited-edition Maybach by Virgil Abloh exemplifies the symbiosis between innovative design and ultimate craftsmanship now available on the road.”