MS Dhoni Adds A Kia EV6 To His Collection 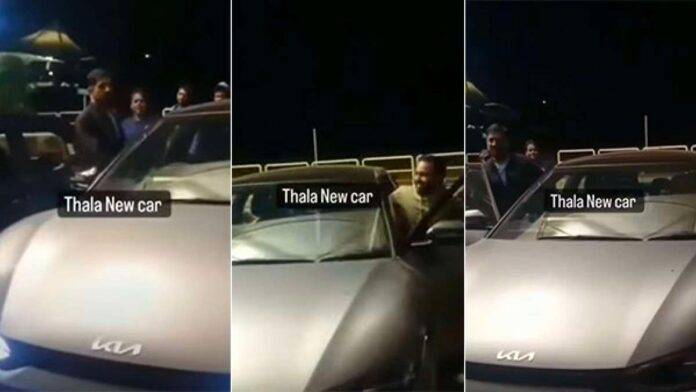 Former captain Mahendra Singh Dhoni is the most avid car and motorcycle enthusiast among all current Indian cricketers. The ace cricketer, who has won numerous awards, has a desirable automobile collection that includes modern and vintage classics on four and two wheels. MS Dhoni recently purchased a brand-new Kia EV6, making it the first all-electric vehicle to be added to his car collection.

Mahendra Singh Dhoni is seen sitting in his new Kia EV6 with his companions, fellow cricketers Ruturaj Gaekwad and Kedar Jadhav, in a video posted on Twitter. The grey Kia EV6, which is the signature colour of the all-electric crossover globally, appears brand new because it is being driven under temporary registration numbers.

The Kia EV6, which will be available in India in 2022, is the most expensive and first all-electric vehicle from the Korean automaker. The Kia EV6 was introduced in limited quantities via the CBU route. However, Kia’s all-electric crossover has gotten off to a fast start, with sales exceeding expectations. Kia recently revealed that it has sold over 200 EV6 units in India since its launch, which is quite impressive for a vehicle of this price and stature. Kia is now anticipating increased allocation of EV6 units in India; however, it has not been confirmed how many additional EV6 units will be allocated to India in the coming months.

Other Cars To Dhoni’s Collection

Dhoni is constantly adding new vehicles to his collection. Dhoni recently added a 1969 Ford Mustang to his collection, which is extremely rare in India. It is a muscle car that has appeared in numerous films in the past.

The 1969 Mustang shares space with Dhoni’s Rolls Royce Silver Shadow, which he acquired some time ago. He was even seen driving the car on the streets of Ranchi when he first purchased it. It rarely comes out of the garage these days.

In the same glass enclosure is a Pontiac Trans-Am that he recently purchased. It is a muscle car as well. MS Dhoni’s most recent purchase is a Pontiac Firebird TransAm classic car. The American muscle car appears to have been recently restored. Its true age could be around 40 years. The 455 big-block V8 engine powers the rear wheels of the car. Peak power is around 325 Bhp, and the transmission is a 4-speed unit.

Dhoni also has a collection of modern cars and SUVs. He drives around in a Hummer H2 that has been brightly painted green. Dhoni also owns a Nissan 1 Ton truck that he purchased and restored in India.