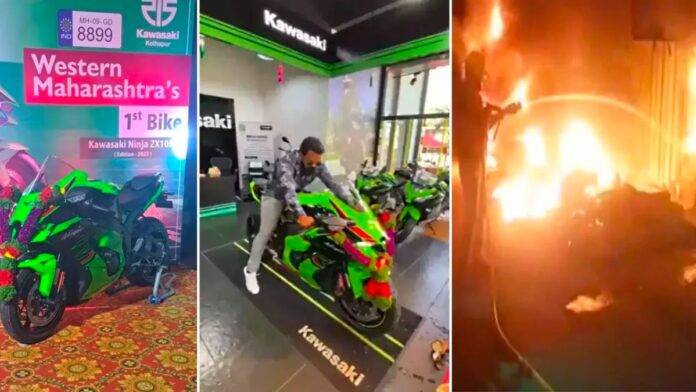 Rajesh Chowgle of Kolhapur was overjoyed when he finally got his hands on his dream bike, a Kawasaki ZX-10R. To commemorate the new motorcycle, Rajesh organised a procession in Kolhapur. However, miscreants set fire to the bike after only 17 days of ownership. Rajesh has now filed a FIR against the unknown individuals.

Rajesh received the bike on the occasion of Diwali. On the road in India, the Kawasaki Ninja ZX-10R costs Rs 21 lakh. To celebrate his new motorcycle, Rajesh led a procession through the streets with drums. Unknown miscreants set fire to the bike, as well as another bike and a new car in the neighborhood.

Nikhil Pajai, Rajesh’s brother-in-law, also purchased a new car, which was delivered on Diwali. Nikhil parked the car in front of Rajesh’s house. Miscreants set fire to the bike and the car early in the morning. The Kawasaki Ninja ZX10R is seen blazing in the fire in videos.
Rajesh has filed a police complaint at Kolhapur’s Karveer Police Station. The police have filed a complaint, but Rajesh has not yet suspected anyone. He also has no animosity toward anyone. The police believe it is a case of jealousy and are investigating. There were no CCTV cameras in the area that could have recorded the incident.

This was the first Kawasaki Ninja ZX10R in Western Maharashtra. The showroom was also decorated for delivery.

This is why CCTV cameras should be installed around the parking area. CCTV can collect vital information that can prevent such events from occurring. Even after such an incident,