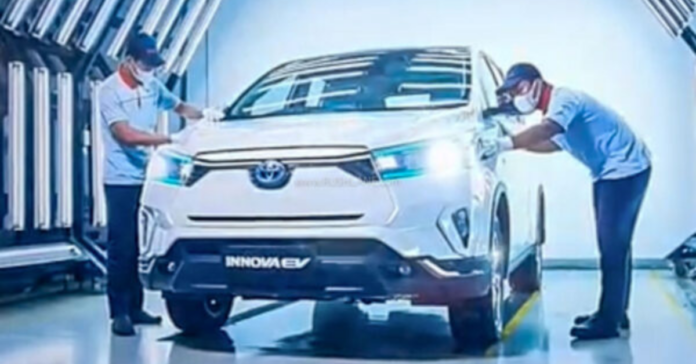 The Toyota Innova EV is on show at the Indonesia International Motor Show, which is now taking place in Jakarta. This is an idea based on the Innova Crysta, which is currently being offered in India. The Innova Crysta is India’s best-selling premium MPV, and the most significant change for this model is the replacement of the internal combustion engine with an all-electric drivetrain.

While Toyota has kept the technical details of the electric Innova under wraps, we expect it to be a potent offering in terms of range and performance. It’s worth noting that the car on display was simply a concept model, and the production-ready version of the e-MPV may have different features and design.

The Toyota emblem is encircled by blue details on the front, which distinguishes the EV variant from other models. The front bumper has been changed, and the alloy wheels appear to have been modified as well. The electric emblem on the rear of the MPV is another noticeable modification, indicating that the future Innova will be an all-electric vehicle rather than a plug-in hybrid.

Aside from that, the new instrument console with an eco metre and a tachometer can be seen in the official video. The automobile retains analogue dials rather than the fully digital screens found in other EVs.

In terms of availability in India, Toyota is unlikely to offer the Innova EV anytime soon. On the other hand, Toyota will definitely keep a close eye on the Innova EV’s reception in India. If there was a market for such electric vehicles in India, the Japanese firm would not hesitate to introduce the car.