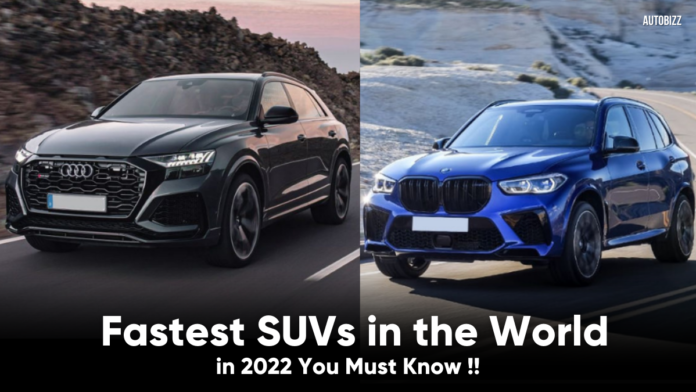 The Fastest SUVs in the World in 2022

The world of automobiles has been long inclined towards SUVs. Many years ago, these were not as popular as they are today as they had limited functionalities. SUVs may not be the most popular when it comes to performance, but there are some options you can turn to for speed. In this blog, we’ve made a list of The 10 Fastest SUVs in the World in 2022.

The Land Rover badge adorns elegantly styled off-road-ready SUVs while its swanky fleet of Range Rover models includes the brand’s trademark ruggedness with increased luxury. The company currently partners with another iconic British automaker-Jaguar under the Jaguar Land Rover moniker. The 2022 Land Rover Range Rover Sport SVR is powered by a supercharged 5.0-liter V8 engine which produces 575 horsepower and 516 lb-ft of torque. With a top speed of 176 mph, this British four-wheeler is capable of reaching 0-60 mph in just 4.3 seconds, making it one of the fastest SUVs on the market. With special features like VR Performance seats, Driver Condition Monitor, 360 Parking Aid, Traffic Sign Recognition, and Adaptive Speed Limiter, this becomes a beautiful combination of sport and luxury which starts at a price point of $141,600 MSRP (Manufacturer’s Suggested Retail Price).

The Alfa Romeo has been an iconic Italian luxury and high-performance car manufacturer for over 110 years. The company started manufacturing and launched its first SUV in March 2003. The 2022 Quadrifoglio ranks in our list at the 9th number. The beast runs on a 2.9-liter twin-turbocharged V6 engine which boasts out 505 hp and 443 lb-ft of torque. The Alfa Romeo Stelvio Quadrifoglio has a top speed of 176 mph and a 0-60 mph acceleration time of just 3.6 seconds. The 8-speed Automatic Transmission with Q4 All-Wheel Drive automatically engages when road conditions require extra traction and torque distribution. The 2022 Stelvio Quadrifoglio starts at $86,850.

Also Read: What are the Fastest World’s Top 10 SUVs

Germany’s very own BMW (British Motor Works) starts off our list with the 2022 BMW X5 M Competition. This German piece of engineering is one of the fastest SUVs with a top speed of 177 mph and 0 to 60 mph acceleration time of 6.8 seconds. With its 4.4-liter BMW M TwinPower Turbo V-8 engine under the hood, the car produces 617 horsepower and 553 lb-ft of torque. The new X5 Competition combines its X range prowess to bring an even greater degree of dominance, fueled by performance and visual appearance. The 2022 BMW X5 M Competition will cost you around $105,900 MSRP (Manufacturer’s Suggested Retail Price).

The British automaker Jaguar started manufacturing SUVs in 2015 with the introduction of F-Pace in September 2015, which was a great success for the brand. The car was unveiled at the International Motor Show Germany in Frankfurt. However, the F-Pace remains on the list of some of the fastest SUVs in the world. The high-performance SUV can achieve a top speed of 178 mph and a 0-60 mph acceleration time of 3.8 seconds. Thanks to its 5.0L V8 Supercharged engine which produces 550 hp and 516 lb-ft of torque. The 2022 F-Pace SVR can set you back for $86,600 as a base price.

DBX is a 5 seater SUV that provides a sumptuous experience for every occupant. The British beast is powered by a 4.0-liter twin-turbocharged V8 engine that produces 542 horsepower and 516 lb-ft of torque. DBX has a top speed of 181 mph and a 0-60 mph acceleration time of 4.3 seconds. With Active all-wheel drive with variable torque distribution and height-adjustable air suspension, as features amongst many, it is a raft of luxury. The 2022 DBX can be yours for a bulky price tag of $179,986.

When it comes to ultimate performance, the Cayenne Turbo GT reaches a whole new level. The Turbo GT boasts a striking appearance and impressive performance, with up to five seats. Under the hood lies a 4.0-liter twin-turbo V8 which puts out 632 horses, making it the most powerful V-8 engine to come out of the Stuttgart’s factory ever. It also set a new lap record at the Nurburgring track. This engine enables it to reach the top speed of 186 mph and a 0-60 mph acceleration time of 3.1 seconds. The 2022 Porsche Cayenne Turbo GT will cost you a starting price of $182,150.

Also Read: What are the Fastest World’s Top 10 SUVs

Maserati is well known for some of its world class vehicles providing comfort and performance. In 1963, the company’s first saloon was launched, and the Quattroporte came into the business. Styled by Frua who were among the most prominent car designers in Italy During the 1960s. The Levante Trofeo is another piece of beauty from the brand, and is one of the fastest SUVs in the world with a top speed of 187 mph and a 0-60 mph acceleration time of 3.8 seconds. Under the hood lies a powerful 3.8-liter V8 engine producing 580 horsepower and 538 lb-ft of torque. The 2022 Maserati Levante Trofeo will cost you a hefty $155,200.

Audi’s RS Q8 is one of the 3 fastest SUVs in the world along with Bentayga and Urus. The RS Q8 is powered by a twin-turbocharged 4.0-liter V8 engine that cranks out 591 hp and 590 lb-ft of torque. The super SUV can accelerate from 0-60 mph in just 3.7 seconds. The Audi RS Q8 offers a Black styling package with logos in black, panoramic sunroof, a head-up display, matrix LED headlights, RS Sports Exhaust, a B&O music system with 3D sound, and RS dynamic package. The 2022 RS Q8 can set you back for $119,900.

Another masterpiece from a British carmaker is Bentley Bentayga and ranks 2nd number in our list. The company came into the competition in 2012 and launched its first SUV in the Geneva Motor Show. Bentayga runs on a 6.0L W12 engine that helps produce 626 horsepower and 664 lb-ft of maximum torque. It has a top speed of 190 mph and a 0 to 60 mph acceleration time of 3.8 seconds, which may be 0.1 seconds more than the Audi RS Q8 but still, it is quicker than many luxury performance SUVs on the market.

Urus was unveiled at the 2012 Beijing Auto Show on 23 April 2012, which got an update n 2021. From 2018 through the end of 2021, a total of 16,000 Urus were delivered globally, making the Super SUV the best-selling vehicle in the company’s history over four years. Under the hood lies a hotdogging 4.0-liter twin-turbocharged engine producing 641 horsepower and 627 lb-ft of maximum torque. Among the top 3 fastest SUVs in the world, the Urus is the quickest to reach 60 mph from a standstill as it can achieve this feat in just 3.5 seconds. The 2022 Lamborghini Urus can be a part of your garage for a whopping $222,000.

Team Autobizz - July 1, 2022 0
Chevrolet entered the realm of NFTs in mid-June by creating a special piece of art for the 2023 Corvette Z06 and hoping to auction...

The Collection Of The Best Second-Hand Cars Under 3 Lakhs

ABOUT US
Autobizz is a leading automotive site competing the top key players in the industry in very less time. We at Autobizz India are on a mission to serve people with daily news on cars, bikes,sand any updates happening in the automotive world.
Contact us: [email protected]
FOLLOW US
© Autobizz Media PVT LTD 2020-21 | All Rights Reserved
MORE STORIES