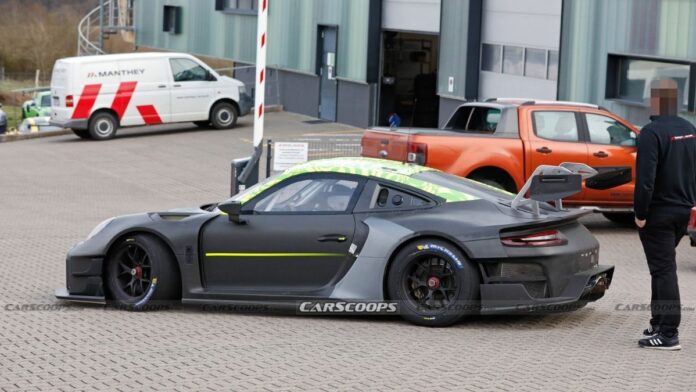 We haven’t heard much about the Porsche 911 GT2 RS Clubsport 25 since it was revealed in August, but spy photographers have reportedly captured a prototype in Meuspath, Germany, where Manthey-Racing GmbH is based.

This is a surprising development, given the 911 GT2 RS Clubsport 25 was supposed to be delivered in January. However, it looks that the model has been delayed, and we’ve contacted Porsche for further information.

Read more: Porsche 911 Dakar Prototype Goes For A Safari In The Ring…

Regardless, the prototype looks almost comparable to CGI images of the Porsche 911 GT2 RS Clubsport 25 revealed last summer. There are a few small variations, such as the installation of quick-release latches and an incomplete rear bumper.

However, the car was developed by Porsche Motorsport to commemorate Manthey-Racing GmbH’s 25th anniversary. The track-day edition “bridges the gap between the 991 and the 992,” with a variety of performance enhancements.

A revised front apron that improves airflow and twin flics that aid boost downforce on the front axle are among the upgrades. The model also comes with a one-of-a-kind carbon fibre hood inspired by the Porsche 911 GT3 R, which has a centrally positioned NACA duct as well as two huge vents.

A large rear wing, front fender vents, and a specifically built engine cover are among the other features. They’re accompanied by a new exhaust system and a Manthey-optimized diffuser.

The variant also comes with an FIA-compliant safety cage, 18-inch central locking wheels, and a much wider track than the 911 GT2 RS Clubsport. The “electronic control systems and steering gear” of the automobile are similar to those of the modern-day Porsche 935.

The 911 GT2 RS Clubsport 25 has a twin-turbo 3.8-liter six-cylinder engine that delivers 690 horsepower (515 kW / 700 PS), keeping with the performance concept. It’s linked to a seven-speed dual-clutch gearbox that drives the rear wheels.

Only 30 units will be produced, with only six going to North America, where they will cost $620,000 before taxes and freight.