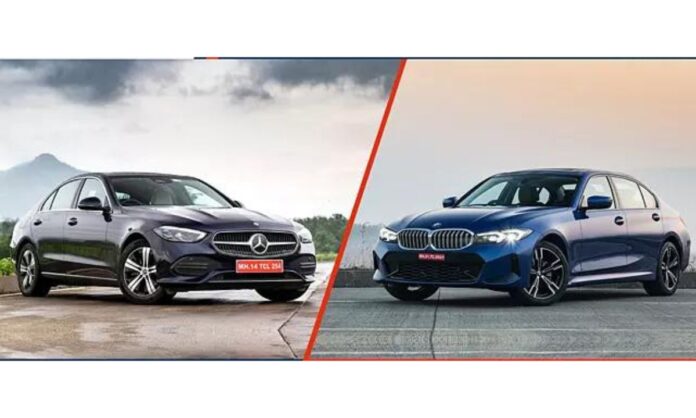 The 3 Series Gran Limousine’s exterior has been revised, featuring a slimmer headlight unit and more aggressive bumper design. It also rides on freshly designed 18-inch wheels, and the re-profiled bumper at the back housing dual-exhaust tips on either side. Because it is currently exclusively available in M Sport trim, the 3 GL is significantly more appealing than previously. It has dimensions of 4819x1827x1441 mm, a wheelbase of 2961 mm, and a ground clearance of 135 mm.

In contrast, the new-generation C-Class measures 4751x1820x1437 mm and has a wheelbase of 2865mm. This is the fifth generation of the C, and it loves to be referred to as the “Baby S” since it has a comparable design and grandeur both inside and out. You can also get the new C in the AMG Line, which adds aggressive splitters, sportier alloys, and diffusers to the C’s newly dynamic posture.

Whereas the 3 GL receives the latest ‘curved display’ that BMW provides in higher-end vehicles, the C-Class gets the 12.3-inch portrait-oriented display that debuted in the S-Class. It is incorporated with the most recent MBUX system, which may be managed by the touchscreen, console touchpad, or steering wheel. Similarly, BMW’s display incorporates the most recent OperatingSystem8 for the iDrive, which is far more current and has all of the latest connection capabilities.

In terms of amenities, both of these sedans have all you’d expect from a luxury sedan, and then some. As a result, you get a panoramic sunroof, digitally advanced headlamps and tail lamps, all-digital screens with connectivity suites, wireless phone charging, inbuilt navigation, electric front seats with memory function, a premium sound system (Burmester in the C-Class and Harman Kardon in the 3 GL), drive modes, and various other driver-assist features. The 3 GL has three zones of temperature control as opposed to the C-two. Class’s

Both the C-Class and the 3 Series Gran Limousine are available with both petrol and diesel engines. The powertrain of the current 3 Series GL is unaltered from the pre-facelift version. In the 330i, you got a 2.0-litre four-cylinder petrol engine producing 255bhp and 400Nm. The 320d diesel is similarly a 2.0-litre four-cylinder with 188bhp and 400Nm of torque. Both engines come equipped with an eight-speed automatic gearbox that directs all power to the rear wheels solely.

Similarly, the C200 has a 1.5-litre petrol engine with 203bhp and 300Nm in the C-Class. Meanwhile, the C220d is powered by a 2.0-litre diesel engine producing 197bhp and 440Nm. Mercedes-Benz, on the other hand, offers the C300d as the range-topping diesel with 262bhp/550Nm. All three powertrains come standard with a nine-speed automatic transmission and a 48V mild-hybrid system.