Tesla Model S Plaid Vs. Lucid Air Vs. E39 BMW M5: How Much Faster Have Sedans Gotten In 20 Years? 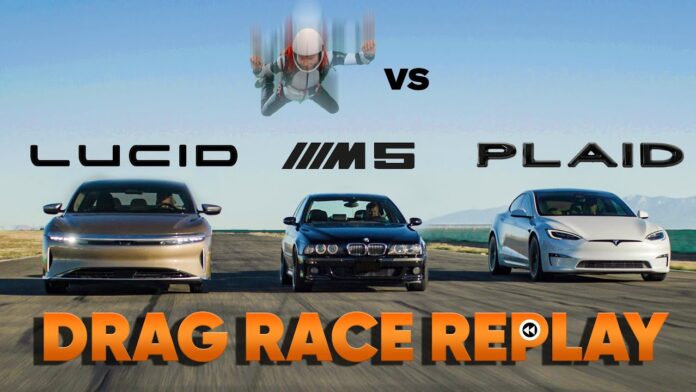 BMW’s E39 M5 was the world’s quickest sedan twenty years ago. Now, fast forward to today, and electric vehicles reign supreme. The Tesla Model S Plaid and Lucid Air Dream Edition, in particular, are undoubtedly two of the most serious competitors for the title of king of sedan speed. But how far have we progressed in the last two decades? In their latest video, Hagerty and Jason Cammisa try to find out by pitting the three against each other with a unique twist.

You would assume this is an unfair drag race because the two EVs have about three times the power of the M5, and you’d be correct. They gave it an edge to help level the playing field by allowing it to start from a 70 mph (113 km/h) roll, but the other two had to start from a stop.

The BMW does its flyover before the Tesla and the Lucid launch into the main drag race. The BMW initially has a comfortable lead, but the other two begin to close the gap owing to that immediate electric torque. In the end, it’s the Tesla that comes out on top, with the BMW right on its tail and the Lucid around two car lengths behind. That’s an outstanding performance from both EVs, especially the Lucid, given how close it came to the M5. Cammisa, on the other hand, has one more test in mind.

We all When it comes to racing other cars, we all know EVs are the kings of acceleration, but how about taking on gravity? To see who could cover a quarter mile quicker, they had a skydiver leap out of a plane at the same moment the Lucid and Tesla launched. Both electric automobiles, it turns out, are quicker than gravity.

You may see the results of Hagerty’s trials for yourself in the video below.