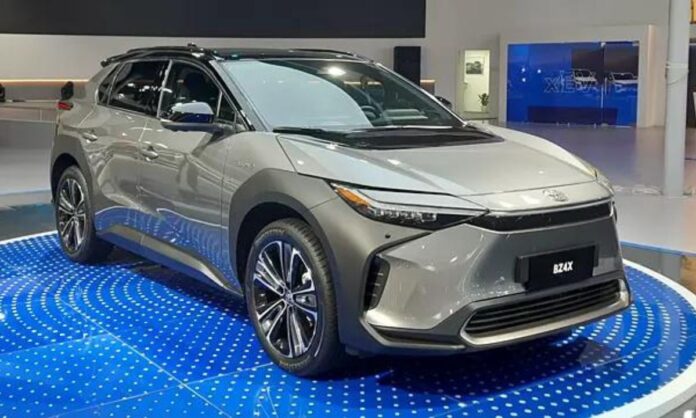 The Auto Expo is always a must-see for automotive aficionados, not just for the sheer number of vehicles on display from all over the world, but also for the technology that powers them. The Toyota exhibit at the 2023 Auto Expo was the most accurate representation of this. The iconic Japanese automaker delivered not just a sizable percentage of its global lineup, but also an astounding array of its technologies.

Toyota’s appearance at the Auto Expo 2023 was a wonderful glimpse into the future of motoring, with a Hydrogen Fuel Cell Vehicle, Plug-in Hybrid Electric, BEV (Battery Electric Vehicle), Self-Charging Hybrid Electric, the H2 Concept (ICE and Hydrogen), and a Flex Fuel Electric. Here’s a closer look at some of the Toyota pavilion’s highlights:

What makes this low-slung, a four-door vehicle so unusual – and significant – is not its sleek design. Toyota’s Hydrogen Fuel-Cell Electric Vehicle technology is housed within its coupe-like body.

In the Mirai, hydrogen from the fuel tank meets air from the grille in the Fuel Cell Stack, where a chemical process using ambient oxygen and hydrogen produces electricity, which drives the Mirai. What is the byproduct? Water! Because hydrogen can be created from a variety of energy sources, an H-FCEV may be considered the ideal eco-car, with a high cruising range, a fast refuelling time, and, of course, zero emissions!

Toyota’s Plug-in Hybrid Electric technology is best shown by the company’s global phenomenon, the ever-popular Prius. The Prius is an instantly identifiable automobile that has gone on to become a phenomenal success owing to its hybrid technology, whether in Los Angeles, London, or, of course, Tokyo.

The Prius’ Plug-in Hybrid technology allows it to drive short distances in the city as an Electric Vehicle, consuming no gasoline. It has a big lithium-ion battery and a plug-in hybrid powertrain with improved efficiency, with a range of 68.2km and a peak speed of 135kph in EV mode. Due to its hybrid technology, the Prius can continue to run on conventional fuel even after the battery charge has been exhausted on a long-distance journey! Its popularity is, thus, predictable.

This is an athletic and futuristic-looking SUV that also happens to be the first Toyota to use the new e-TNGA – Toyota New Global Architecture platform.

The bZ4X provides not just a smooth ride and engaging performance, but also the off-road capabilities of a genuine SUV. Aside from EV technology, it also provides a high degree of safety owing to Toyota Safety Sense, the brand’s most recent active safety package. Looking for thrilling performance accompanied with peace of mind? The ball is in your court!

Our very own Innova HyCross and HyRyder created an impression as self-charging hybrid electric cars at the Auto Expo 2023!

Self-charging hybrid vehicles are another illustration of Toyota’s thoughtful approach to technology. A SHEV makes advantage of power created by braking and deceleration, which is then stored in a battery. When you need more power, the stored energy is released, and you receive all the power you could want – and then some!

Apart from being the guy behind some of the most outstanding vehicles of our time, what is Toyota President Akio Toyoda renowned for? No? That’s what it takes to be a racing car driver! And the automobile you see here is based on one that Mr. Toyoda raced only last year!

The Corolla Cross H2 Concept, which has a three-cylinder turbocharged engine, is based on race-tested technology found in the GR Corolla H2. It has two compressed gas hydrogen tanks under the floor in addition to its regular engine. But what Toyota truly wants is to employ hydrogen in liquid form. What’s the deal with that? Because liquid hydrogen has a higher energy density, it can provide a much longer cruising range.

Toyota understands how to remain ahead of the competition, from the starting line to the checkered flag. So we come to its Flex Fuel Electric technology, which is the closest representation of the future.

This is no ordinary Corolla Altis; this vehicle has a flex-fuel engine and an electric drivetrain. With ethanol being a favourable bio-fuel for India’s agrarian economy, this format works perfectly since it not only utilises more responsible fuel, but it also operates for an extended amount of time in EV mode, when the engine is turned off! Wouldn’t you agree this is proper flexing?

If you believed that was the end of it, you’d be incorrect. Toyota’s approach to technology isn’t only about making the world a better place; it’s also about making the world exciting! This Glanza Concept Car provides a glimpse into Toyota’s technological genius in motorsport, where it has long had a significant presence. Its hunkered-down stance certainly gives it the appearance of being racy and ready to pound down the circuit. It’s the only thing like it at the Expo!

Toyota’s second forte, to put it bluntly, is off-road vehicles. The Extreme Off-roader idea, based on the Hilux 4×4, represents the conclusion of Toyota’s decades of off-road prowess. The Extreme Off-Roader Concept is a one-of-a-kind machine with a towering, intimidating look, foundations built to take on the very worst, and a presence that’s certain to make anything else feel small.

Since we’re on the subject of off-road domination, what greater illustration can there be than the all-new Land Cruiser 300, the King Of The Terrain? This megalithic edifice is powered by a 3.3L V6 engine with a 10-speed automatic transmission, AWD Integrated Management (AIM), and a Multi-Terrain Monitor. Simply said, it’s the most adaptable SUV of all time, with an unrivalled heritage and reputation.

So, how was that for a comprehensive rundown of Toyota’s incredible technologies on display at the Auto Expo 2023? Have you decided on a favourite yet? It’s a coin flip for us between reclining in the Vellfire’s rear seat and dune-bashing in the Extreme Off-Roader Concept!

New Verna and Air Micro SUV From Hyundai To Launch This...