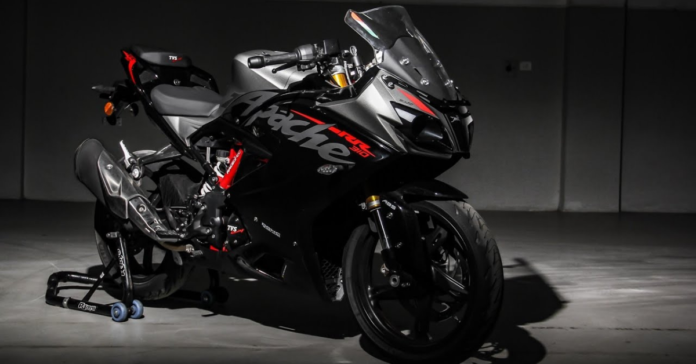 The first-ever TVS Asia One-Make Championship will be held in May 2022, and it will be organised by TVS Racing. The firm has also launched the race-spec Apache RR 310 for participants in this race competition. The bike is based on the Akula supersport concept, which was first shown in 2016. TVS has continued its racing tradition with the release of this bike.

This racing machine, according to TVS, is powered by a 312cc DOHC 4-valve, liquid-cum-oil-cooled, single-cylinder engine that produces 46 horsepower, which is 38% more than the regular Apache RR 310. To provide consistent performance on the race track, the engine features forged pistons and titanium valves, as well as significant modifications to the cooling system.

Aside from that, the maker has used a RAM air intake system to boost the bike’s top speed. The race machine also has an ARacer ECU for handling electronics, which includes features like closed-loop control, quick shifter, launch control, and traction control. The majority of the body parts, including the wheels, are made of carbon fibre, according to the manufacturer. Carbon fibre is used to make the entire tail section, which also functions as a structural subframe.

Dunlop soft-compound radial racing tyres are fitted to the wheels, which are touted to provide optimal grip during acceleration and deceleration. The race bike has a bespoke steering damper, as well as front and rear suspension from Ohlins. TVS has developed a double exhaust system that helps to achieve a wider powerband.