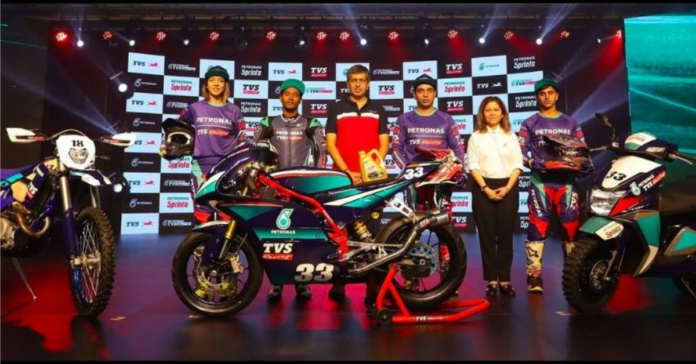 For the Apache range, TVS has announced a 5-year agreement with Petronas, which includes the formation of a team called Petronas TVS Racing and the co-branding of an oil called Petronas TVS Tru4 RacePro. Since 1982, TVS has been generally praised for their efforts to improve the Indian two-wheeler scene. The newly formed joint venture between an Indian manufacturer and a Malaysian oil company plans to compete in a variety of national-level motorsport competitions.

Petronas TVS Racing will compete in the National Rally Championship, Indian National Motorcycle Racing Championship, and National Supercross Championship. They’ve also displayed their different racing products for each of the aforementioned races. The livery of the new racing motorcycle is a mix of Petronas and TVS brand colours. The TVS Apache RR 310 race bike was recently unveiled alongside two other products: a dirt bike and a performance rally scooter, as part of the launch of the ‘Asia One Make Championship.’

The ‘Asia One Make Championship’ will take held in four Asian countries, showcasing a diverse range of riding talents. Petronas has been seeking to grow its influence in India because it sees India as one of the most promising markets in the world. Petronas has expanded its portfolio by starting to produce Sprinta engine oil locally in Mumbai.

In addition, by May 2022, TVS and Petronas plan to release Petronas TVS TRU4 RacePro, a premium motorcycle engine oil designed specifically for the Apache series. TVS has also invested EUR 100 million in Norton Motorcycles, with the goal of reviving the brand and expanding its UK factory in Solihull, West Midlands.