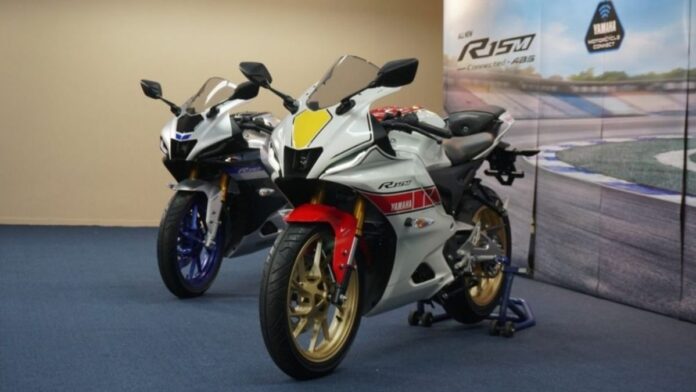 Yamaha raised the cost of numerous of its goods, including the R15 V4, at the start of 2022. In September of last year, the new-generation R15 model was released. Metallic Red cost Rs 1.68 lakh, Dark Knight cost Rs 1.69 lakh, and Racing Blue cost Rs 1.73 lakh at the time of debut. The Monster Energy MotoGP Edition and R15M Silver have priced at Rs 1.78 lakh and Rs 1.80 lakh, respectively.

The R15 V4 range in India has priced from Rs 1.76 lakh to Rs 1.86 lakh, ex-showroom, with the latest price hike this month in April 2022. Until recently, the R15M Metallic Grey was the most costly R15 V4 model. Yamaha India has unveiled a more pricey version of the R15 V4 today. Yamaha has also made an appearance.

The YZF-R15M World GP 60th Anniversary Edition is priced from Rs. 1,88,300 (ex-showroom, Delhi). It’s based on the YZF-R15M, and it’s the company’s first foray into the premier motorcycle road racing series since 1961. The gold Alloy wheels, Yamaha factory race-bike gold Tuning Fork insignia, black levers, and unique commemorative badging on the Fuel Tank are all part of the white and red’speed block’ color scheme.

“The YZF-R15M in the WGP 60th anniversary livery is more than simply a remembrance of our racing past; it’s a milestone displaying Yamaha’s more than 500 World Grand Prix wins since 1961,” remarked Mr. Eishin Chihana, Chairman, Yamaha Motor India Group of Companies.

As a member of the Grand Prix paddock, it’s a mark of our unrivaled enthusiasm for racing, our conviction in the sport’s power, and our dedication to promote, safeguard, and encourage the motorsports culture. We’re ecstatic to be able to share this special edition with Yamaha enthusiasts in India. We will continue to develop enthusiasm in the premium market in India with such unique introductions in the future as part of the ‘The Call of the Blue’ strategy.”

In comparison to the R15 V3 model, the R15 V4 and R15M come with a number of improvements. The new R15 bikes have a single projector headlamp instead of the twin LED headlamps. With new crisp LED DRLs, the front fascia now looks sportier. The fairing, fuel tank, exhaust muffler, and tail section have all undergone changes. The visuals on the body have also been modified.

USD front forks with a golden finish are another important improvement for the R15 V5 and R15M. This feature was a long-awaited request from fans, and it has now been included in the upgraded edition. The international-spec R15 was available on USD forks, but it was not accessible in India. The R15M is more expensive since it comes with extra features including a golden brake calliper, R15M logo on the pillion seat, and a quickshifter. Quickshifter is only available in the Racing Blue edition of the R15 V4.

Both engines have the same 155cc liquid-cooled, SOHC, 4-valve engine that produces 18.4 ps of maximum power at 10,000 rpm and 14.2 Nm of maximum torque at 7,500 rpm. It has a 6-speed constant mesh transmission attached to it. Front and rear brake discs are 282 mm and 220 mm in diameter, respectively. ABS with dual channels is standard.

Also Read: Launch Of Bajaj-Triumph Bikes In India And Their Expected Price