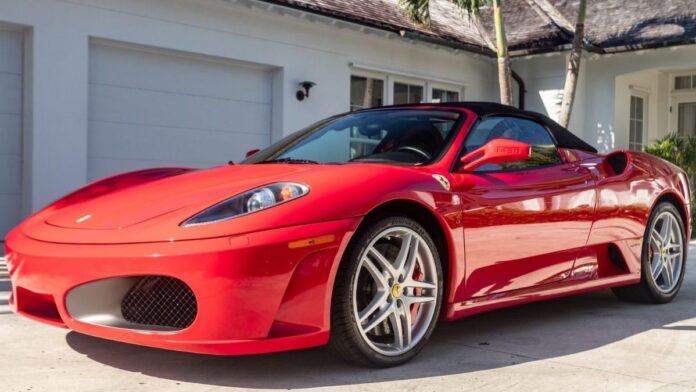 Between ancient and new Ferraris, between collector classics and cutting-edge contemporary supercars, the F340 exists. It’s essentially a facelifted and updated 360 Modena that’s quick and exciting to drive, but in terms of speed and complexity, it’s a step and a half below the 458 that succeeded it.

The 2004-2009 F430, on the other hand, is a historic Ferrari since it was the final mid-engined Ferrari with a manual transmission. Given how antiquated the F1 single-clutch paddle-shift manual feels compared to a current twin-clutch ‘box, and how much affection there is in the car community for manual transmissions, it’s now much more difficult to acquire a new car with one, few F430 customers chose a stick when the car was new.

As a result, the manual and paddle-shift F430s have vastly different values. According to Hagerty Insurance’s assessment calculator, a 2009 F430 Spider with the F1 transmission in Condition 2 (good condition but not concours) would be worth $175,000, up from $135,000 this time last year, demonstrating the model’s rising popularity.

However, it implies that a manual version of the same car is worth 100% more, making a decent stick-shift Spider worth $350,000 and an immaculate, concours-grade example for $466,000. A brand new Ferrari F8 Spider costs roughly $280,000, or did until Ferrari stopped taking orders last month.

We’re quite confident this 11,000-mile 2009 Spider on Bring-a-Trailer won’t approach $400k, but based on the prices paid for identical manual F430 spiders on the same site in recent months, it’ll end up at $300k or more, and likely more than a brand new F8.

Two hundred grand is a hefty premium, but if you’re dead set on owning one of the last stick-shift Ferrari sports cars, place your offers before the auction closes on Thursday, April 14.

read more:- Jaguar XJR-6 Is A Supercharged Art Sedan That You Can Buy