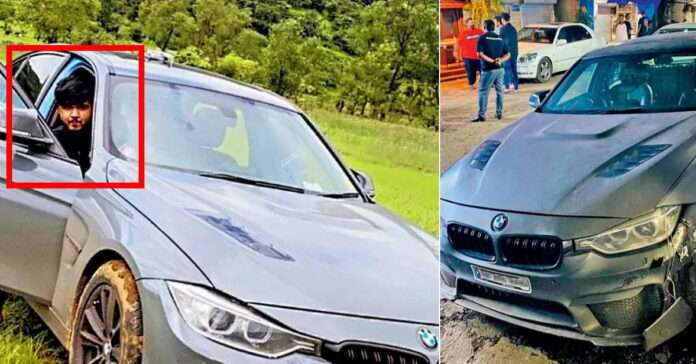 Keith Salome Menezes, the 23-year-old prime suspect in the BMW hit-and-run case in Mumbai, was arrested on Saturday at Hyderabad Airport by Mumbai Police. Keith was on his way to Dubai when he was apprehended. The Mumbai Police Department issued a lookout circular, which thwarted his plans.

Harry Bastian, a Thane resident, was hit by a speeding BMW sedan on a flyover on Western Express Highway in Kandivli in the early hours of August 29. Harry was riding a scooter when he was thrown off the bridge and landed on the road below. He died instantly. On the same day, an unknown person drove the BMW to an Andheri garage to have its damaged fender repaired.

Keith Salome Menezes did not return home after the pictures of the BMW car with damage on the front left side were published at midday.

Keith drove away from the scene of the accident and parked his car in a high-end garage. The police were unable to locate the BMW because the registration plate was unreadable in the CCTV footage. When the owner of the high-end garage saw the article, he realised it was possible that the car parked in his garage for repair was the same vehicle. When the garage owner reported the incident to the police station, no action was taken.

The cops mistook this vehicle for a Skoda rather than a BMW. Eyewitnesses who drove 32-year-old Harry Bastian to the hospital, on the other hand, saw the vehicle and confirmed that it was a BMW.

Keith Menezes was detained at the airport, according to Vishwas Nangre-Patil, Joint Commissioner of Mumbai Police (Law and Order). A Mumbai Police team was flown to Hyderabad to complete the arrest procedure. Keith Menezes was getting ready to board a flight to Dubai. He was detained, however, at 4:30 a.m. on Saturday. Menezes appeared in court but was released because the offense is available.

The police also stated that there are numerous pending challans against the vehicle for speeding. It is unknown how the case will progress in the future. However, because it is a bailable offense, the police may take other steps, such as searching bank accounts for evidence of alcohol purchases. The incident occurred in August, and police made no progress. When the victim’s family arrived around midday, the journalists launched their own investigation and assisted the police with evidence.

When the newspaper attempted to contact Keith earlier, he stated, “My car was damaged in Borivli in the first week of August, and I visited the garage in the second week of last month.”