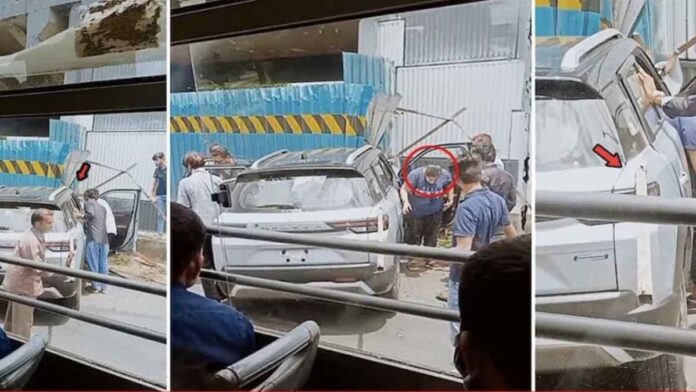 A Maruti Brezza is seen in this video as being involved in an accident where a steel or iron rod can be seen passing through it. One of the few Maruti products, the Brezza, has a solid 4-star safety rating from GNCAP. There is no reason to think that the safety feature would have been compromised even though the updated Brezza 2022 model has many changes both inside and out. And in a way, this video proves that. Read more information here.

Prateek Singh uploaded the video to YouTube. His goal in publishing such content is to increase awareness among Indian car owners and buyers of the value of choosing vehicles with a high NCAP score. The Gujarati YouTuber has been told about this incident. Undoubtedly, this is one of the first instances of the new Brezza being involved in such a significant matter. The information indicates that the collision was quite significant. A child and a woman who was driving were both in the vehicle. Thankfully, both of them were saved by nearby residents and are now safe.

The onlookers reported that the front of the compact SUV had been deformed in terms of damage. The images, however, don’t show what the front end looks like. The terrifying aspect, however, is a steel or iron rod that can be seen emerging from the C pillar. This rod must have come in from the front of the cabin, managed to get past the passengers, and then emerged from the back. We don’t have to describe what would have happened if there had been a third party there. The travelers should count themselves fortunate to have avoided this.

Last but not least, we want to remind our readers to obey traffic laws. Overspeeding remains the primary cause of such incidents, and it is assumed that this is the case in this instance as well. Overspeeding must have caused the driver to lose control, who then struck the construction site’s equipment. But perhaps this situation could have been completely avoided if the speed had been under control.

Ayushmann Khurrana in Mercedes Maybach GLS 600 and Karishma Kapoor in...

$14 Million License Plate Spotted In The Wild in Dubai