Tata Altroz Rolls Twice In A Accident – Keeps Everyone SAFE 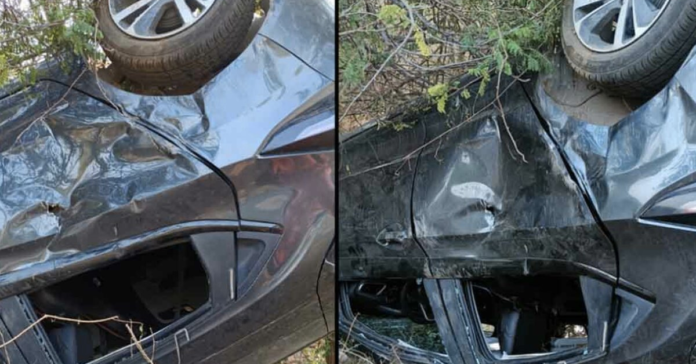 A Tata Altroz rolled twice in a big accident and with significant damage. The passengers, on the other hand, escaped with no injuries. Tata Motors has improved the safety of Indian automobiles in recent years. It is one of the few companies with a fleet of cars that have received a 5-star safety rating. Tata automobiles, including the entry-level models, have garnered high safety ratings. Now, a catastrophic collision involving the Tata Altroz has put the premium hatchback’s safety ratings to the test. The crash’s outcome demonstrates the Tata Altroz’s high build quality, since it kept all passengers safe. Let’s look at it more closely.

Read More: Here’s How Safety Rating System For Cars In India May Look Like

A Tata Altroz was involved in a serious collision, as shown in the photographs above. The automobile rolled twice before landing upside down on the side of the road. The exterior shell was severely damaged as a result. The right door is smashed, and the glass panel is also missing. The Tata automobile, on the other hand, had a complete cabin and roof pillar. During the crash, there were five persons in the vehicle. Everyone was unharmed during the collision. The amazing result emphasises the significance of safe automobiles and safety ratings/standards.

The accident is alleged to have been caused by driver error. Every year, tens of thousands of people die in preventable incidents. The quality of Indian roads varies greatly from one location to the next. Furthermore, because unexpected items (animals, children, potholes, etc.) may emerge out of nowhere, it is critical to maintain vigilance when driving. Fortunately, you may now get a reliable vehicle (with good build quality and safety equipment). Tata’s higher sales are likely to motivate other automakers to produce safer vehicles as well. Nonetheless, obey the traffic laws and report anyone who is driving dangerously to the police. Speeding is a definite no-no.