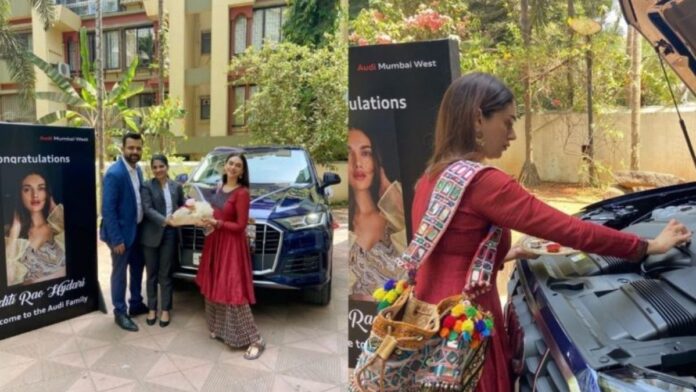 Aditi Rao Hydari is a Bollywood actress who has appeared in films such as Padmaavat, Boss, Rockstar, and Wazir. Recently purchased a brand-new Audi Q7. Among celebrities, the luxury SUV is well-known. The Q7 has a starting price of Rs. 82.49 lakhs ex-showroom and a top price of Rs. 89.90 lakhs ex-showroom. Aditi chose the color Navarra Blue Metallic. It’s unclear which version the Bollywood star received.

The Q7 from Audi comes with a long list of amenities. It comes with a virtual cockpit, which Audi refers to as a digital driver’s display. It is totally customizable and displays a variety of vehicle-related data. A top-down view of the SUV is provided via a 360-degree parking camera. It makes parking the vehicle in narrow parking places much easier.

You get a panoramic sunroof that floods the cabin with light. There are four climate zones, so each person has his or her own climate zone and can modify the temperature to his or her liking. There features an Android Auto and Apple CarPlay touchscreen infotainment system. Ambient lighting, cruise control, adaptive wipers, automatic LED headlamps, B&O premium sound system, electrically operated driver seat with memory function, and other features are included.

The Q7 is now only available with a single petrol engine. The engine is a turbocharged 3.0-liter unit. The engine has a maximum power output of 340 PS and a maximum torque production of 500 Nm. A 48V mild-hybrid technology is also used by Audi to give additional power. When the driver has to overtake or coast, it comes in helpful. It aids in the reduction of emissions and the improvement of fuel economy. Audi’s transmission is an 8-speed torque converter unit capable of transferring power to all four wheels via Audi’s legendary Quattro all-wheel-drive technology.

The Audi Q7 weighs in at a whopping 2.2 tonnes, which is to be expected for a full-size premium SUV. It can still reach 100 kilometres per hour in 5.9 seconds and reach a top speed of 250 kilometres per hour. Diverse drive modes are available, each of which alters the shifting responsiveness and smoothness, steering weight and feedback, engine response, suspension stiffness, and so on. Efficient, Dynamic, Auto, and Comfort are the four driving modes. You can also use the Individual mode to customise the perimeters to your needs.