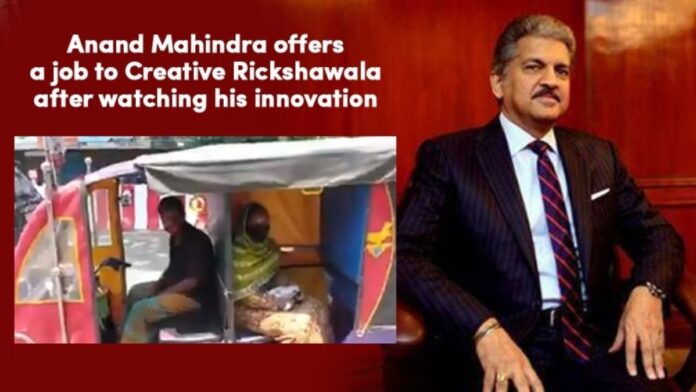 After seeing a rickshaw driver’s unique proposal, Anand Mahindra gave him a job in the R&D department. He’s known for being on top of everything noteworthy that’s going on in the country and throughout the world. He also never holds back his thoughts, and people admire him for his openness and honesty. He is one of India’s most-followed businesspeople on Twitter, with over 9 million followers. Let’s see what his most recent tweet is about.

On his Twitter account, Anand Mahindra posted a video clip of a rickshaw driver implementing a novel idea. During Covid’s time, the social distance was the order of the day. ‘Necessity is the mother of invention,’ goes the old adage, and it’s true under certain circumstances. A rickshaw driver has devised a novel seating arrangement for his vehicle. This is in line with the concept of social distancing. He compartmentalized his car so that passengers can seat in four different and independent locations without sacrificing personal space. He effectively used a line of demarcation to separate the entire auto-rickshaw into four pieces. The movie demonstrates all of the sections as well as how efficient they are at maintaining social distance.

Anand Mahindra sent a tweet to his R&D department requesting that this talented individual be hired. He recognizes that the necessity to develop and adapt allows for such out-of-the-box thinking, and he is awestruck by the achievement. He wants this rickshaw driver to be his vision and creativity advisor. This isn’t the first time he’s applauded individuals for doing the unfathomable. That is why so many people look up to him and regard him as a role model. More entrepreneurs in prominent positions like him are needed in the country and around the world.

Make sure to keep an eye on Anand Mahindra’s social media accounts to see what he’s up to next. His posts will be humorous and enjoyable in any situation.

Most Affordable Electric Cars In India