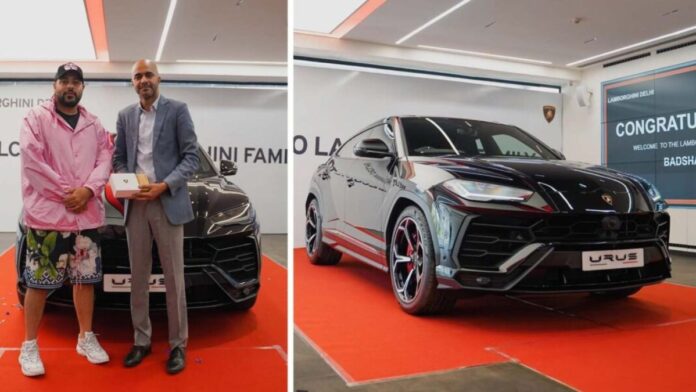 Lamborghini India has been on a roll recently, having recently delivered the 200th Urus performance SUV in the country. The flashy Italian supercar manufacturer required four and a half years to accomplish the milestone, and the 100th unit was reached early last year. The Urus received such a positive response that it accounted for 80% of first-time buyer purchases.

With almost 20,000 units sold, the Lamborghini Urus is the brand’s best-selling vehicle both in the country and abroad. Giallo Auge (yellow), Nero Noctis (black), and Bianco Monocerus are the most favored color schemes among Indian clients (white). And Badshah has chosen Nero Noctis color this time.

This is the second Urus SUV in his Badshah car collection, having previously purchased a used Urus in the Rosso Anteros color. He could be seen posing with the black Urus while taking delivery of it in the photos. The Urus is powered by a 4.0-liter twin-turbocharged V8 engine that produces 650 PS of maximum power and 850 Nm of peak torque.

The engine is coupled to an eight-speed ZF automatic transmission, which sends power to all four wheels. The Urus is claimed to have a 3.6-second zero-to-100-kmph acceleration time and a top speed of 305 kmph. Lambo is planning to release a facelifted Urus by the end of this year.

It might be called the Urus Evo. Prices for the Urus begin at Rs. 3.55 crore in India, and it was first presented in 2018 as the company’s first modern SUV. It shares the same architecture as the Audi RSQ8, Bentley Bentayga, and Porsche Cayenne, but it has a higher level of performance.

In the following months, it will face a direct competitor in the form of Ferrari Purosangue. The Lamborghini Urus boasts a distinctive design with sharp cuts and creases, while the inside has traditional Lamborghini touches.