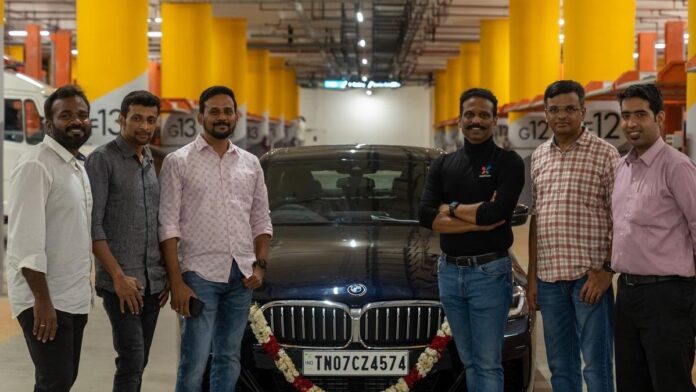 Loyalty is always rewarded in some fashion, and what better way to celebrate years of dedication to your work than with a pricey BMW? This is exactly what occurred to five senior management executives of a Chennai-based IT firm who were recently presented with BMW 5-Series automobiles in recognition of their years of loyalty and commitment to the company. Kissflow, a global software-as-a-service company, has given these luxurious cars to five employees for helping the company navigate through the COVID-19 storm, which endangered the company’s life at one time.

In reality, the corporation chose to surprise the 5 employees by keeping the ‘present’ a secret until just hours before the ceremony. Suresh Sambandam, CEO of Kissflow Inc., then handed over the pricey BMW 5-Series to these five executives. These five employees have been with the organization since the beginning and have remained loyal to it throughout their careers. The CEO went on to say that some of the honorees came from poor beginnings and had to overcome numerous obstacles to get to where they are now.

“It was a terrible moment. Even during the pandemic, investors were unsure whether this company would be able to survive and grow. “Today, we are really glad that we have paid back the investors and that the company is now totally owned and operated by private individuals,” Sambandam added. When they were forced to convene for the ceremony, few of these employees were aware of their incredible gift, and many began to wonder what was going on. Their excitement, on the other hand, had no boundaries as the costly BMW 530d automobiles rolled in one by one, parallel to each other, along with the employees’ families.

Some of the recipients were only informed of their award in the afternoon, and they all assumed it would be a “nice surprise,” while others assumed it would be a little outing with the CEO. Some mistook it for a simple outing with the bosses. Dinesh Varadharajan, Chief Product Officer, Kauskiram Krishnagayee, Director (Product Management), Vivek Madurai, Director, Adhi Ramanathan, Director, and Prasanna Rajendran, Vice-President were among those who received BMW 5-Series automobiles. “It’s a nice surprise for me.” I was under the impression that we were going out to lunch or dinner with everyone. Krishnasayee said, “I didn’t expect this.”

“These are the five people that stuck with me in the trenches,” Sambandam remarked after handing over the keys to the new automobiles to their owners. Kissflow would not be where it is today if it weren’t for them, and this is only a small measure of our gratitude. I’m glad they’re having fun with their family.”

Also Read: Anand Mahindra Offers R&D Job To A Autodriver For His Innovation