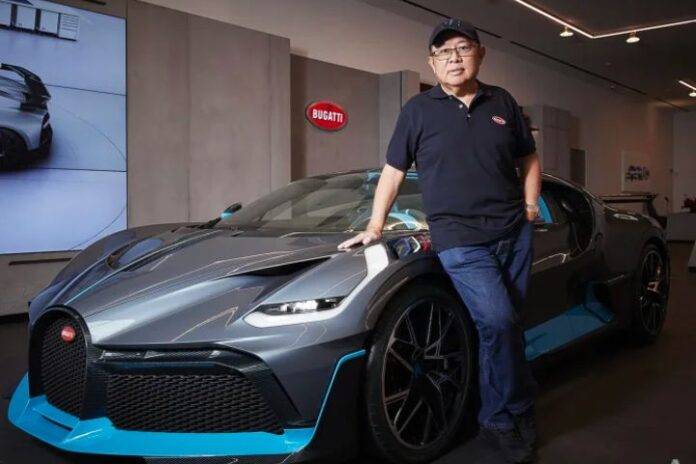 Chin Jit Pyng’s car collection is Malaysia’s largest private car collection. In 1996, he founded the successful IT firm Silverlake Innovation Partners. There is no official count of the number of cars he owns. According to multiple reports, he has anywhere between 60 and 100 cars in his private garage. Most of his one-of-a-kind vehicles are displayed at his JPM Museum in Kuala Lumpur. To keep a low profile, he drives a Proton X50 or X70 on a daily basis.

Because he constantly buys and sells cars, it is nearly impossible to recall all of them. However, it is certain that he owns vintage cars ranging from Lamborghinis and Ferraris from decades ago to ultra-modern hypercars including three Bugattis. His first Bugatti is the Chiron, which he purchased in 2016 after taking a test drive with his son. It ended up costing him $2.6 million USD (approx Rs 21 Crore when converted to INR).

The Bugatti Divo, one of only 40 ever made, is the next car in Chin Jit Pyng’s collection. Divo is powered by a standard 8.0-liter W16 engine with 1,500 PS and 1,600 Nm of peak power and torque. It is worth an incredible $5.7 million USD (approx Rs 45 Crore when converted to INR). However, his passion for Bugattis remains, as he plans to purchase the Bugatti Bolide, which is scheduled to arrive in 2024.

The McLaren P1 hybrid supercar is currently the most valuable model in Chin Jit Pyng’s Car collection. Only 375 of these were ever produced, and JP owns the 128th. This incredible machine is powered by a 3.8-liter twin-turbo hybrid engine. Peak power and torque are 916 PS and 900 Nm, respectively. This supercar’s top speed is a mind-boggling 350 km/h. The sprint from 0 to 100 km/h takes only 2.8 seconds. The car has only traveled 570 kilometers in five years. It cost a whopping $1.5 million USD (approx Rs 12 Crore when converted to INR).