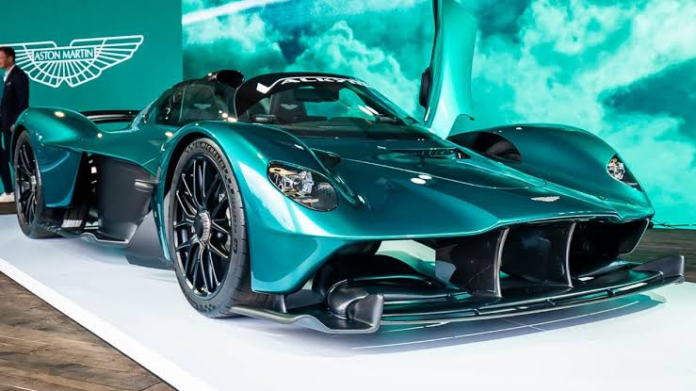 Manny Khoshbin, professional a real estate investor and living in his mansion located in Orange Country. He is amongst the most amazing car enthusiast with an insane car collection. Cars like the only 6 McLaren SLR collection to the one of one Hermes collection, Manny owns the world’s one of the most gorgeous supercars ever made. His car collection is like a world-famous art gallery of supercars.

After the recent Hermes edition, Mclaren Speedtail Manny hasn’t stopped with that, he’s next hypercar is on its way with all the F1 technology. In his recent video, Manny reveals his next car for the add-on to the insane collection. He visited the car week at Monterey, where he got the first look at the Valkyrie. Luckily he came to know that few of these orders were left and felt like having one Aston in his collection.

The Aston Martin Valkyrie is also called Nebula (original codename) AM-RB 001 (final codename). It’s a limited edition hypercar made( Only 85 units) with the help of collaboration with Red Bull Racing technology and many others. Bring up the most amazing experience over the track as the car will have the F1-inspired tech. There is a coupe version which was also a limited production hybrid sports car.

The car is equipped with a 6.5-liter V12 engine from Crossworth which produces over 1160 Horsepower. Combined with electric motors to power the rear wheels. The engine is also capable of revving up to 11,000 rpm giving an insane torque of over 740 Nm.

Being a roadster so it’s having a removable roof panel so the mechanism is designed for it. The car has a totally track-focused look giving it a stunning look. The car nose has a traditional shape with the Aston Martin badging at the center. It’s a rear mid-engine car. Where the engine is placed right back of seats giving the drive a pure experience while driving. From the side profile, the car looks longer and the fins running from the sides help in aerodynamics.

With an active rear wing, which provides a downforce of over 1400 kg at the speed of 240km/h in track mod. The rear end is where all the game changes. From an F1 perspective, the car has given a lot of room under car. There’s a center-breaking light as a formula 1 car with the exhaust over it which defines it’s a hard-core racecar.

Thinking of buying one?

Aston Martin will be making 150 of the coupe where 25 units have already been made. The roadster version of the valkyrie is also limited to 85 units is confirmed to be delivered by 2023 or 2024. The base version of the car costs about $3.8 million USD. The additional specs of the car can cost up to $4.2 million USD.