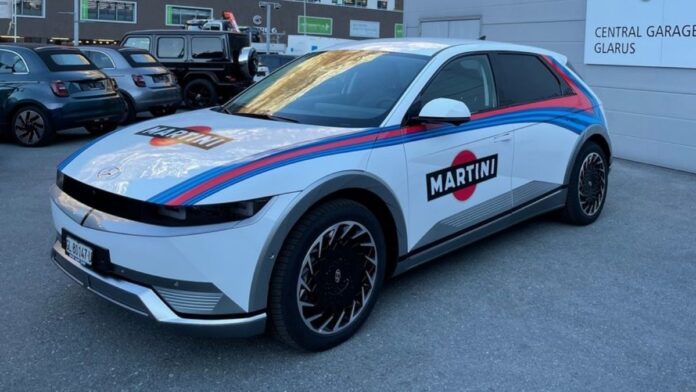 The Hyundai Ioniq 5’s retro-inspired appearance has proven to be one of the car’s most appealing features, and the owner of one specific model has had the EV wrapped in an unusual pattern to make it stand out even more.

The Ioniq 5’s design has been compared to that of the Lancia Delta, therefore it’s only right that it now wears a Martini livery. This livery begins with a Martini emblem on the hood and continues down both sides with two multi-colored stripes. On the front doors, there are also enormous Martini emblems.

The pricing of this Ioniq 5 has been set at 61,900 Swiss Franc ($64,993) through Central Garage Glarus in Glarus, Switzerland. It was originally registered in February and has only been driven 500 kilometres (310 miles), indicating that the previous owner didn’t get to enjoy it for very long.

While the Hyundai’s appearance has garnered a lot of attention since its debut, the inside is just as intriguing. This car’s inside is covered in black vegan leather, as opposed to the white vegan leather of the Ioniq 5 we evaluated late last year. The flat floor, sliding centre console, two-spoke steering wheel, digital instrument cluster, and big infotainment screen are among the car’s most noticeable features. It’s a great location to spend time, and while the Ioniq 5 may appear little in images, the inside is fairly large.

Read more: Tesla Model S Plaid Is No Longer A Sleeper With This…