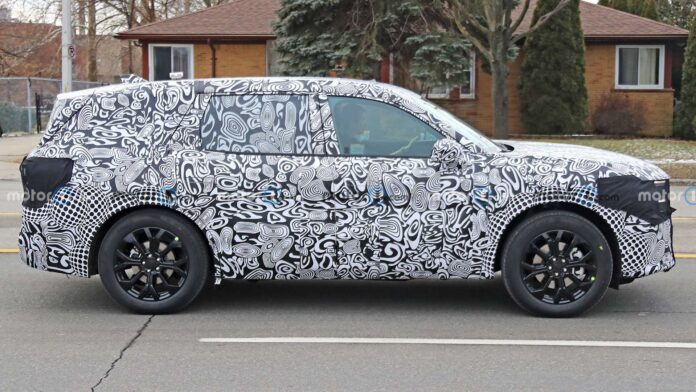 The Fusion was retired by Ford in 2020, yet there have been several claims that it would be revived. Although it hasn’t happened yet, Ford may be on the verge of restoring the brand. A boxy Ford SUV seen in new spy images near the company’s testing site might be the Fusion’s successor.

A huge SUV with straight corners and a full-body camouflage covering is shown in the photographs. The style is eerily similar to that of the Ford Equator and Equator Sport, two crossovers sold in China. However, there appear to be noticeable variations in the greenhouse and rear hatch, which might just be a result of the camouflage covering up most of the vehicle’s design. The silhouette of Ford’s oval logo and dual daytime running lights are plainly apparent.

The SUV appears to be a standard crossover, however we’d have to remove the wrap to see how Ford fashioned it. The type in the images has flush door handles and built-in taillights. Ford also appears to have put cladding to the hatch in order to distort its design and keep us guessing. While the test car appears to have the same size and form as the Equator Sport, it appears like Ford will give this new model its own style.

When it arrives, Ford is expected to call this new vehicle the Fusion Active, according to reports. However, this is only conjecture, since the name has been mentioned previously. The Ford Edge is out of date and due for replacement, thus Ford might be working on a replacement, albeit that would mean dropping the Edge brand in favour of Fusion.