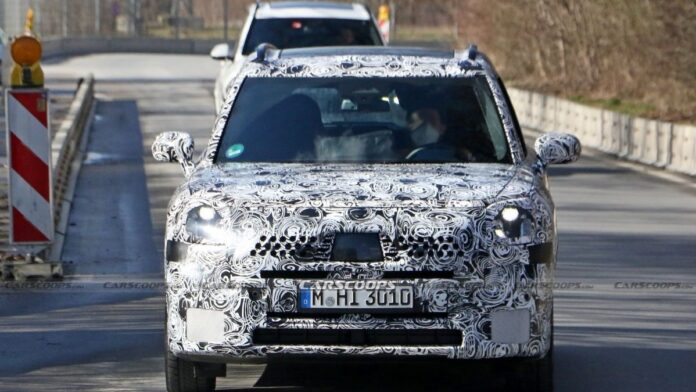 The next MINI Countryman will be a crossover built on the same platform as the BMW X1 and X2, but that doesn’t mean it won’t be fun to drive. As a result, the mandatory testing at the Nurburgring – where, yes, everyone and their luxury car, SUV, or EV appears, but it doesn’t change the fact that it’s hard.

The crossover, which we’ve seen identical vehicles testing before, has quad-tailpipes and looks the part. All evidence point to this being the MINI Countryman S or similar high-performance variant, given the large brakes and intakes.

Read more: BMW i4 Electric Sedan To Be Revealed On April 28

According to rumours, the plug-in hybrid MINI will be the most powerful MINI ever. The powertrain will purportedly deliver 318 horsepower (240 kW/322 PS) to all four wheels by combining a 1.5-liter three-cylinder engine with a rear-mounted electric motor. That’s approximately 100 more horsepower (74.5 kW/101 PS) than the current Cooper SE Countryman All4 PHEV and nearly 20 more than the Mini Countryman JCW (15 kW/20.2 PS).

Although there are no visible signs that this is a plug-in hybrid, the chassis will need to be fine-tuned to manage all of the powertrain’s oomph, so it’s no surprise that the car is being tested on a German track.

Previous spy shots have revealed that the infotainment system would be housed on a large, spherical screen in the centre of the dashboard. That alludes to the car’s premium character, a market segment Mini has previously expressed interest in pursuing.

BMW also announced today that the Mini Countryman will be available exclusively with cast-aluminum wheels created from recyclable material and powered by renewable energy. As a result, the carbon footprint of the wheels should be reduced by up to 80%.

In 2023, the redesigned Mini Countryman will be available as a model year 2024 car. It, along with its chassis-mates, the BMW X1 and X2, will be built in Leipzig, Germany.