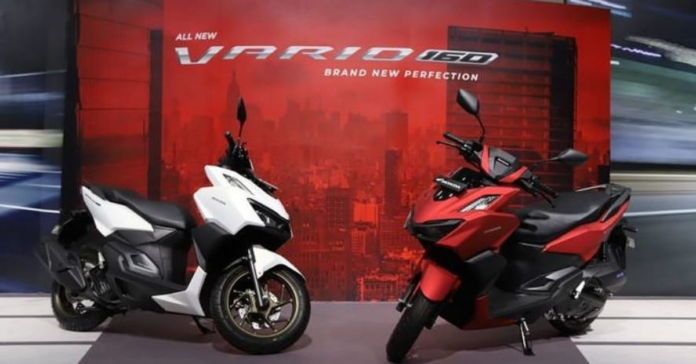 Honda has added the new Vario 160, a sporty-looking scooter for the Indonesian market, to its scooter portfolio. It’s worth mentioning that the business already sells the Vario 125 and 150 scooters in Indonesia, and has now added its most powerful brother. Honda began making Vario scooters in 2006, and the company continues to make cosmetic and performance changes to keep up with other scooter models on the market. In Indonesia, the Vario 160 competes directly with the Yamaha Aerox 155.

The new Honda Vario 160 features sleek and edgy look inspired by maxi-scooters, despite the fact that it is not a true maxi-scooter. This scooter has a bold design language as well as advanced functions. To begin, the scooter has all-new twin-beam headlights with LED DRLs on the front fascia. Turn indicators with LED position LEDs are mounted above the headlights. The Vario logo is also printed in 3D writing on the front fender.

When it comes to the back end, the front end’s edgy and cutting design language has been carried over to the tail section and rear fender. The Vario 160’s sturdy appeal is enhanced by the single-piece grip rail. The scooter’s athletic appeal is enhanced by blacked-out parts such as alloy wheels, exhaust muffler, floorboard, tiny visor, and rearview mirrors. A USB charger, a digital instrumental console, and a smart key are all included in the scooter’s features.

The new Honda Vario 160 is available in two versions: CBS and dual-channel ABS. The scooter is powered by a 160cc liquid-cooled single-cylinder engine that produces 15 horsepower at 8500rpm and 13.8 Nm at 7000rpm and is mated to a V-Matic automatic transmission. Both the front and rear brakes are disc brakes, while the front suspension is handled by telescopic forks and the rear suspension is handled by a swingarm. In terms of its introduction in India, it does not appear to be happening anytime soon.