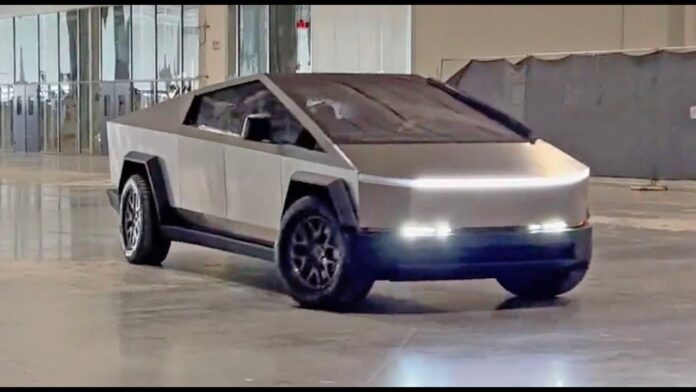 The Cybertruck was undoubtedly the centrepiece of Tesla’s Cyber Rodeo event, which took place last week at Gigafactory Texas in Austin.

After Franz von Holzhausen drove it up there in a moment that reminded everyone of the Cybertruck’s November 2019 launch, it even received some stage time next to Elon Musk. Tesla’s design chief, on the other hand, refrained from hurling metal balls at the pickup’s windows this time.

Some of the upgraded features of the electric truck were on display at the Cyber Rodeo, including the doors with no handles, the retractable rear glass, the side view cameras hidden in the plastic wrapping surrounding the front wheels, and a charging station on one of the fenders.

The interior was also open to the public, but there was nothing to write home about because the prototype lacked a production-ready cabin. The yoke supplied from the Model S and Model X, for example, lacked an airbag, and many of the parts were not up to final production standards.

However, some of those who kept a close eye on the Cybertruck got to see something remarkable at one point: the rear-wheel steering feature.

While it wasn’t a long demonstration, the Cybertruck prototype’s rear wheels clearly turn in the opposite direction of the front wheels in a video from Cybertruck Owners Club. This feature will come in handy during low-speed movements, as it will help minimise the pickup’s turning radius, making parking manoeuvres easier.

On a truck with a larger wheelbase than the Ford F-150, rear-wheel steering is a must-have function. On a huge vehicle like the GMC Hummer EV, we’ve seen how much of a difference it makes in terms of agility, but it’s unclear whether Tesla will go the other mile and offer something akin to the Cybertruck’s CrabWalk feature. Last year, Elon Musk teased the Cybertruck’s rear-wheel steering feature on Twitter.

During the grand opening of Tesla’s new factory in Austin, Texas, Elon Musk confirmed that production of the Cybertruck would begin there in 2023, likely at the beginning of the year. The electric pickup was originally supposed to enter production in late 2021 and was later postponed to late 2022. Here’s hoping we won’t see another delay and Tesla will start making the Cybertruck in early 2023.

Datsun Could Return Yet Again As EV Brand For Emerging Markets: Report