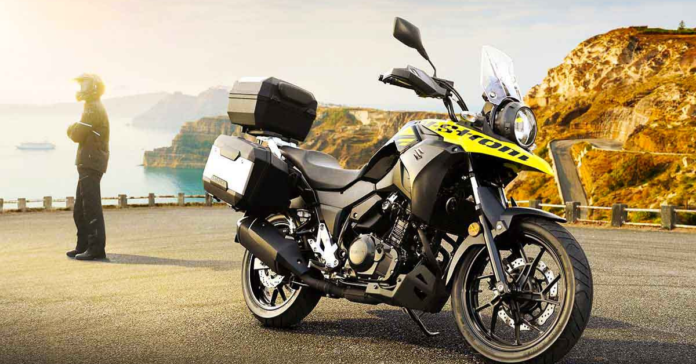 Suzuki Motorcycle India Private Limited (SMIPL) has announced the debut of the new Suzuki V-Strom SX in India, signifying Suzuki’s entry into the 250cc adventure sports touring sector. The style and design of the 250cc V-Strom SX is influenced by its larger V-Strom brothers. The V-Strom SX’s beak design was influenced by the iconic Suzuki DR-Z racing and the DR-BIG off-road versions, according to Suzuki Motorcycle India, and was created particularly for the V-Strom SX. The bike will be offered at all Suzuki Premium dealerships across India in three colours: Champion Yellow No. 2, Pearl Blaze Orange, and Glass Sparkle Black.

The 249 cc, single-cylinder, oil-cooled single overhead cam (SOHC), four-valve engine from the Suzuki Gixxer 250 series produces 26 horsepower at 9,300 rpm and 22.2 Nm of peak torque at 7,300 rpm. The V-Strom SX has a higher ground clearance of 205 mm and a kerb weight of 167 kg than the Gixxer 250. The fuel tank capacity stays at 12 litres. Suzuki claims that the 250 cc adventure sports tourer has employed MotoGP analytic technology to build the valves, shim type roller rocker arms retainers, and pistons, all of which are lighter. According to Suzuki, the V-Strom SX’s engine features a piston that adds to improved performance and better fuel efficiency, and it can handle a broad range of scenarios, from city riding to high-speed cruising. Sensors feed information to the electronic fuel injection system, which keeps track of and delivers the right quantity of fuel for the conditions.

The Suzuki V-Strom SX also has a Suzuki Easy Start System and Bluetooth connectivity via the Suzuki Ride Connect app, which includes features like turn-by-turn navigation, incoming calls, SMS alerts, WhatsApp Alert display, missed calls, speed exceeding warning, phone battery level display, and estimated arrival time. A USB outlet on the instrument cluster’s left side can be used to charge a gadget. It illuminates blue, making it simple to find and use even in dim light. Only Android systems have the missed call warning and caller ID features. In India, the Suzuki V-Strom SX will compete against the KTM 250 Adventure and the Benelli TRK 251.

Satoshi Uchida, Managing Director of Suzuki Motorcycle India, remarked during the launch, “We feel delighted to announce our entry in the 250 cc adventure sports segment with the launch of V-Strom SX. The All-New V-Strom SX has been manufactured to cater to the needs of the riders who like a versatile sports adventure tourer. V-Strom SX will be perfectly suitable for city and highway riding as well as to explore various kinds of adventure terrains on a motorcycle. Today, motorcycles have evolved as an extension of their owner’s personality and riders look at their motorcycle as a partner rather than just a vehicle to commute. We are confident that with its all-around capabilities, V-Strom SX will perfectly blend with the latest demands of Indian riders. All-New 250cc sports adventure tourer has been conceptualized to follow the footsteps of its big brother and make people fall in love with its performance on daily basis, touring capabilities, and features.”