This Chopped Up Beetle Tricycle With A Ford Focus Face Will Cost You $7,500 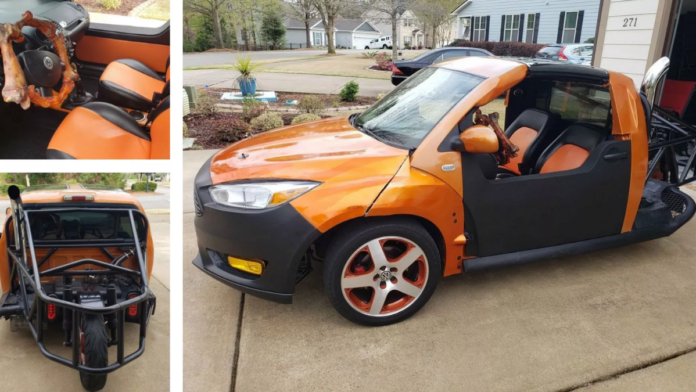 The coachbuilding industry is flourishing, but only a select few can afford one-of-a-kind or limited-production cars. On the other hand, folks with the requisite expertise are making Frankenstein vehicles by merging parts from several production models to create a one-of-a-kind vehicle. A chopped-up VW Beetle with three wheels and a Ford Focus face, presently available for $7,500 on Facebook Marketplace, is a good example.

The custom tricycle was manufactured in 2019 utilising a diesel-powered 2003 VW Beetle as a donor vehicle, according to the description. The builder appears to be a fan of the Polaris Slingshot, as seen by the removal of the back end and replacement of the rear axle with a single wheel placed on a tubular frame. With a truck-style exhaust set vertically, the rear half of the body is borrowed from a pickup.

Only the mirrors, door handles, the angle of the front windscreen, and the VW symbol on the duo-tone five-spoke wheels remain evocative of the Beetle’s profile; everything else has been drastically redesigned. The doors have been chopped and painted black, and the T-Top panels on the bespoke roof let more light into the two-seater cabin.

Aside from the “in-your-face” bone-decorated steering wheel rim and gearknob, the inside is mostly unaltered. The orange upholstery on the leather seats and door cards, as well as the wood finish on the centre tunnel, complement the exterior.

The front end, which includes the headlamps, front bumper, bonnet, and front fenders with custom-made extensions to visually integrate with the profile, originates from a Ford Focus MK3 facelift. The bonnet close lines have vanished, indicating that the entire front clip is now a clamshell that opens upwards with the bumper. The construction features a number of flaws, including front wheelarches that are misaligned with the wheels, but that is to be expected when pieces from two distinct cars are combined.

Read more: Someone Has Managed To Ruin A Gorgeous Lexus LC 500

The standard 1.9-liter TDI four-cylinder turbodiesel engine under the hood produces 100 horsepower (74 kW / 101 PS) and 240 Nm (177 lb-ft) of torque until being phased out owing to pollution regulations in the early 2000s. Before the build, the engine was refurbished, with the water pump, thermostat, timing belt, and hoses replaced by the owner. The car has gone 10,000 miles (16,093 kilometres) after its makeover, while the distance in its previous life as a Beetle is unclear.

Due to the diesel engine, the “Focused Beetle” is defined as a Spring, Summer, and Fall car that is particularly economical and dependable. According to the vendor, it cruises at 75-80 mph (121-128 km/h) on the highway and has cruise control, despite the lack of windows, which must be a difficulty at high speeds.

According to the listing, the car is situated in Blythewood, South Carolina (US) and is still available for anyone willing to spend $7.5k for a one-of-a-kind ride. Despite the amount of time and effort put into this VW’s restoration, the price seems excessive for a chopped-up 20-year-old Beetle. However, the seller is willing to accept fair bids, so how much would you pay for it?