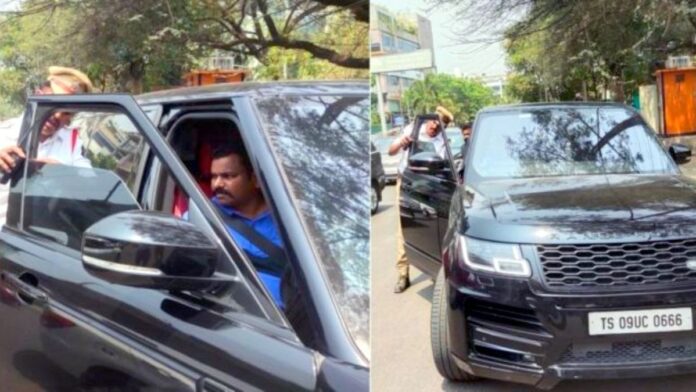 With summer approaching, many automobile owners are putting black films to protect their vehicles from the greenhouse effect. Despite the fact that black films are prohibited in India, many stars and celebrities drive cars with dark tinting. While normally police officers avoid celebrities, this year’s traffic cops are not sparing anyone, including actor Allu Arjun.

Allu Arjun was also slapped a Rs 700 challan by the police for the black film. The fine was paid on the spot by the actor. Allu Arjun drives a Range Rover that has been customized.

The Hyderabad traffic police recently organized a special operation to stop such vehicles. Any car with an MLA sticker, imitation stickers, or black films was pulled over. All owners of such vehicles had to pay significant fines. The cops pulled over the autos that had black films on them and removed them. In addition, the cops removed any stickers from the vehicle.

Actors Allu Arjun and Kalyan Ram were both stopped for the challan on different occasions. Many more famous citizens of the city were also detained.

Sunfilm Are Not Allowed in India

One of the most broken restrictions in India is the tinted window rule. While the law is strictly enforced in major cities such as Delhi, Bangalore, and Mumbai, motorists in many other cities continue to use tinted windows to protect themselves from the sun. It should be mentioned that aftermarket tinted windows are not permitted in Indian automobiles. This was done to make sure that passersby could clearly see what was going on inside the car.

It is important to emphasize that no Indian politician, including the Prime Minister, is allowed to utilize such sirens and flashers in their car. Fines have been imposed on politicians in the past for similar offenses. However, the cops in Patna did not levy any penalties for the illegal attachments on the vehicle’s roof this time. Only emergency vehicles, such as ambulances and official police cars, are allowed to use sirens and strobes in India.

It’s also worth noting that the new MV Act allows the police to fine government officials twice the amount set for the general population. This rule will guarantee that those in positions of authority do not break the rules and provide a good example for ordinary motorists on public roads.

Also Read: China And US Are Largest Car Markets In 2021, Italy Falls…