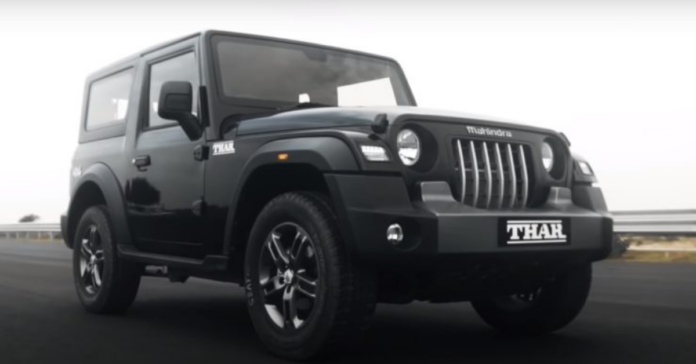 The Mahindra & Mahindra Thar is one of the most popular four-wheel-drive SUVs in the country, as well as one of the most customised. People enjoy customising SUVs to their preferences, and one such example can be found here. Autostyle Bangalore has customised the Thar this time, and the YouTube video has been posted on their channel. The upgraded model now has 20-inch gasoline alloy wheels, as seen in the video, and it looks really amazing.

The Thar has undergone a slew of cosmetic changes, but mechanical advancements have remained constant. The enormous 20-inch multi-spoke alloy wheels, which are sourced from Fuel, are the focal point of the modifications. BG Goodrich tyres are fitted to these wheels. The plastic front bumper has been replaced by a metal bumper. Off-roading was taken into account when designing these bumpers.

Additionally, there are two red-painted hooks on the bumper, as well as lifting gear. In addition, LED units have been added in fog lamps. LED headlamps have also been installed in place of the regular headlamps. Hola supplied these newly installed headlamps, which also include LED DRLs. Maddog alpha lights have also been added for improved visibility while off-roading. LED reflectors have been installed in the rear reflectors.

There are interior upgrades as well as exterior updates. Nappa leather covers the new white and black-colored upholstery. The workshop has also fitted front and rear armrests for increased comfort. A Magician Tech Meter tiny digital instrument console is added, which is modelled after Audi’s previous-generation virtual cockpit, which is available in their RS automobiles.