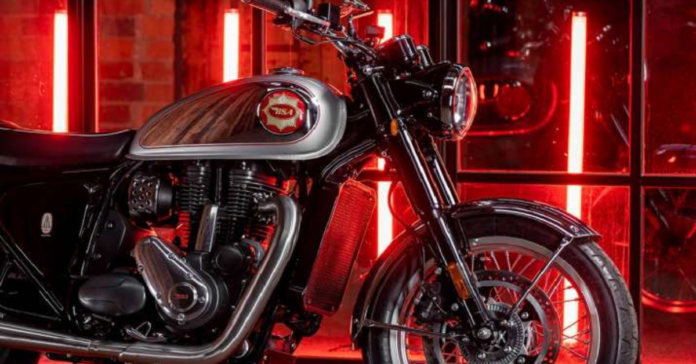 BSA Motorcycles made an official reappearance in December of last year with the debut of its new bike, the Gold Star 650, at the National Motorcycle Museum in the United Kingdom. The official launch took place at the Motorcycle Live Show in Birmingham, UK, on December 4, 2021. As previously announced, the new Gold Star motorcycle will be produced in the United Kingdom and has been designed with UK customers in mind. Click here to see if we believe it will be released in India. The all-new BSA Gold Star 650 cruiser motorcycle is shown in action in the following photos:

The 2022 Gold Star is the ideal combination of classic design and cutting-edge technology. The company stated that they paid close attention to every detail, from the lines to the tyre typefaces. The chrome polished fuel tank, engine casing, and fenders on the BSA Gold Star 650 give the motorcycle a genuine classic aesthetic.

The motorbike is powered by a 652cc liquid-cooled, single-cylinder, four-valve, DOHC engine with a 5-speed transmission that produces 45 horsepower of maximum power at 6,000 rpm and 55 Nm of maximum torque at 4,000 rpm.

The Pirelli Phantom Sportscomp tyres are mounted on classic wire-spoke alloy rims (18-inch front and 17-inch rear) on the BSA Gold Star 650. The motorcycle has a 12 gallon petrol tank and a kerb weight of 213 kg. The Gold Star would compete in the 650cc motorcycle segment against the Royal Enfield Interceptor 650 and the Continental GT 650.