HomeBikeTake A Look At This Royal Enfield Inter Scrambler 650 By K-Speed...
BikeBike NewsNews 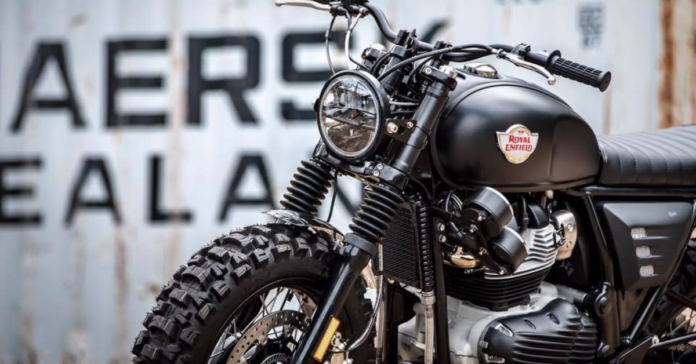 We occasionally come across big motorbike modifications, but some stand out and need to be mentioned. K-Speed (Thailand) recently completed a motorbike modification on a Royal Enfield Interceptor 650, which we recently came across. The placement of the instrument panel towards the engine is one of the best features that distinguishes this modification. Customizers have mounted the factory-installed instrument console vertically next to the motorcycle engine.

The RE Interceptor 650 has been modified in the same way as the Triumph Scrambler, with the identical exhaust arrangement. The heat shielding coating on the twin Diablo pipes protects the rider’s skin, while the round exhaust ends give the motorcycle a distinctive look. The modders gave the motorcycle a powerful stance by fitting it with large off-road tyres on both sides. Both sides have blackened out rims to match the 130/60 tyres. A shield has been added to the engine box, and mesh apertures have been added to the custom side panels.

The front LED lighting has been installed by the customizers, and the modified single-seat saddle adds to the aggressive posture of the Royal Enfield Inter Scrambler 650. The conventional handlebar has been changed with a huge custom-pipe handlebar, and the switchgear layout has been adjusted with one that has considerably easier functioning. Its strange appeal is enhanced by the general blackened out components.

No mechanical changes to the motorcycle have been proposed by the customizers. The 648cc parallel-twin, 4-stroke, fuel-injected engine in the upgraded Royal Enfield Interceptor 650 continues to produce a maximum output of 47HP @ 7250 rpm and a peak torque of 52 Nm @ 5250 rpm. The engine is connected to a 6-speed transmission. It retains the same disc brakes on both ends, as well as the normal suspension arrangement.