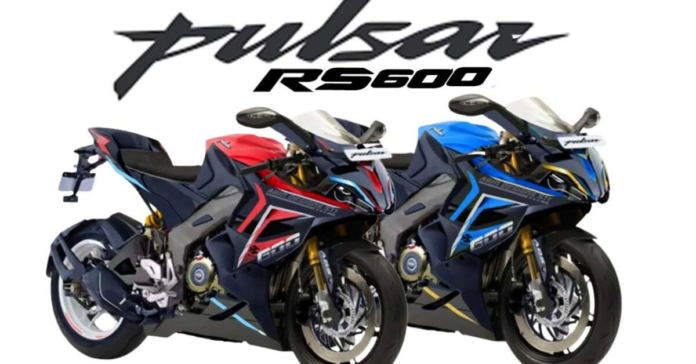 Abin Designs 511 has digitally illustrated a concept version of the Bajaj Pulsar RS600, which we hope to see in production to compete with the Yamaha R6. Modifications to ordinary motorcycles are popular among motorcycle enthusiasts, even if they are done digitally. In our market, Bajaj Pulsar is a household name with a product in practically every key segment. However, you are unlikely to see an RS600 on the road in the near future. To remedy this, this digital artist has taken his concepts and made them a reality. Here are the specifics of this one-of-a-kind bicycle.

The first impression is that this is a worthy competitor to models such as the Yamaha R6 and Kawasaki ZX6R. The entire appearance is compact, forceful, sporty, and daring. At first glance, the rich body graphics are the most noticeable clues. A sleek LED headlight cluster, a small wind visor with integrated ORVMs, a semi-fairing with a Bajaj logo and 600 engraved on it, a muscular fuel tank with angular creases, a split-seat setup, slim taillamp, tyre hugger at the rear, white-painted alloy wheels with red inserts, short exhaust pipe, engine protection guard, and striking side body panels make up the front end.

Though we are unlikely to see something like this on the market anytime soon, we may compare it to something like the Bajaj Pulsar RS400, which has a better chance of becoming a reality. It could have a 373-cc single-cylinder oil-cooled engine with peak power and torque of 43 PS and 35 Nm. For smooth gearshifts, this engine could be connected to a 6-speed manual gearbox with a slipper clutch. Both wheels could include dual-channel ABS and disc brakes. The RS400’s ex-showroom price is expected to be around Rs 2 lakh.