Bored Of Safari-Style Porsche 911s And Can’t Wait For Lamborghini’s Sterrato? How About A Safari Cayman? 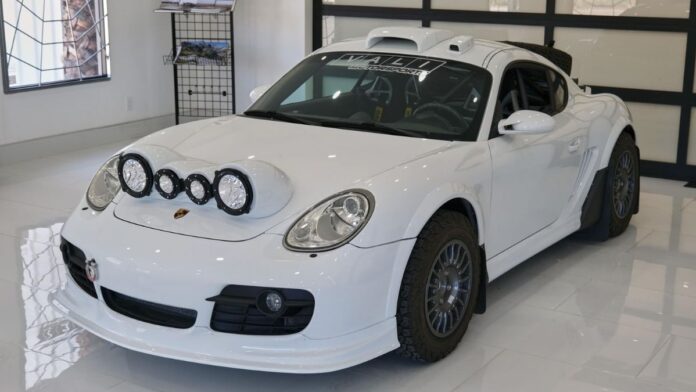 In recent years, we’ve seen a slew of aftermarket Safari-style Porsche 911 adaptations, and now Porsche is reported to be working on its own version based on the 992, dubbed the 911 Dakar.

So the concept of a raised 911 on knobbly rubber is nothing new. However, if you apply the same logic to the 911’s younger sibling, you’ll have an even more distinctive take on the notion that’s sure to turn attention.

Because of the 987 Boxster’s mid-engined layout, two-seat arrangement, and pocket-supercar silhouette, this rally-spec Cayman now being auctioned on PCar Market resembles the impending Lamborghini Sterrato more than the new 911 Dakar.

This one-owner, 72,000-mile Cayman S began its existence in the United States in Beverley Hills in 2006, with no idea that it would one day be converted into the beast it is now. Vali Motorsports completed the modification, which included a fresh coat of white paint, a rebuilt 3.4-liter flat-six engine with an enhanced IMS bearing and GT3 muffler, and a new clutch, limited slip differential, and Auto-Blip system for the six-speed manual transmission.

Vali also updated the suspension, installed a bespoke roll cage and hydraulic brakes, and replaced the factory Porsche sports seats with a set of buckets with Sabelt harnesses.

But it’s the other improvements, the ones visible from the outside, that distinguish this vehicle. An aggressive splitter (perhaps not what you want in an off-road car, but it looks great), a VMS hood with a rally light pod, a functioning roof vent, an unique spare wheel mount, and a fibreglass ducktail rear spoiler are all visible from the front.

But it’s the 16-inch Braid wheels with their massive 215/85 BF Goodrich off-road tyres tucked beneath freshly flared fenders that really catch your eye. There doesn’t appear to be much more ground clearance than stock, and the vendor admits that skid plates would be necessary to safeguard the mechanical components before taking this Cayman off the beaten path. But, let’s be honest, most people will buy the 911 Dakar and Huracan Sterrato because this entertaining build looks the part.

Read more: Porsche 911 Dakar Prototype Goes For A Safari In The Ring…