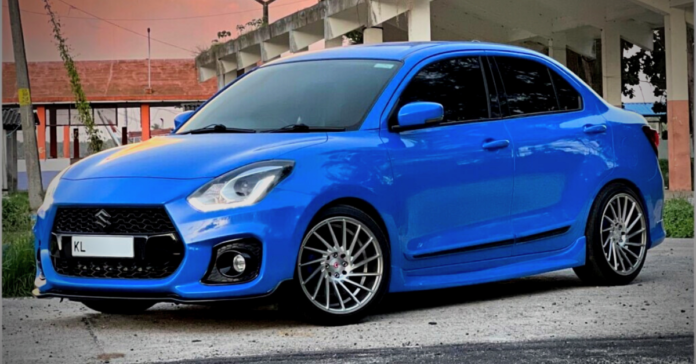 The Maruti Swift Dzire continues to top the sales rankings in our market, reinforcing its dominance in the compact sedan sector. This updated version emphasises the athletic side of the car. This Maruti Dzire with the Swift Sport’s front end is an intriguing modified version. While the majority of people are content with the way the Dzire looks now, there must be others who are eager for a new take on the tiny car. This improved variant is aimed to mix the athletic aspects of the Swift with the practicality of the Dzire for all of them. Let’s have a look at the specifics of this unique design.

The Dzire’s front end has the Swift’s conventional fascia, but the all-black grille gives it a more adventurous aspect. However, the key highlights may be seen in the side profile. The silver finish on the turbine-shaped 17-inch alloy wheels contrasts nicely with the Dzire’s blue paint. Aside from that, the Cobra custom low springs and custom side body package reduce the vehicle’s centre of gravity, improving stability and handling even in spirited driving situations. The blacked-out windows also add to the street’s appearance. Modifications like this could improve the vehicle’s performance. Lowering the height, on the other hand, might make underbelly scrapes more likely.

The 1.2-litre naturally aspirated petrol engine in the Maruti Dzire produces 88 horsepower and 113 Nm of peak power and torque. You can choose between a 5-speed manual and an AMT transmission. There’s also a CNG version, which produces 76 horsepower and 98 Nm of peak torque. The Dzire’s costs, ex-showroom, range from Rs 6.09 lakh to Rs 9.13 lakh. Direct competitors include the Honda Amaze and Hyundai Aura.

Trending Now:  Lexus LFA Successor Will Be An All-Electric Supercar
Facebook
Twitter
Pinterest
WhatsApp
Email
Tumblr
Telegram
Previous articleKia and Hyundai Looks To Be Getting CNG Models Soon
Next articleHonda Jazz Could Be Wiped Out Of The Indian Market In 2023