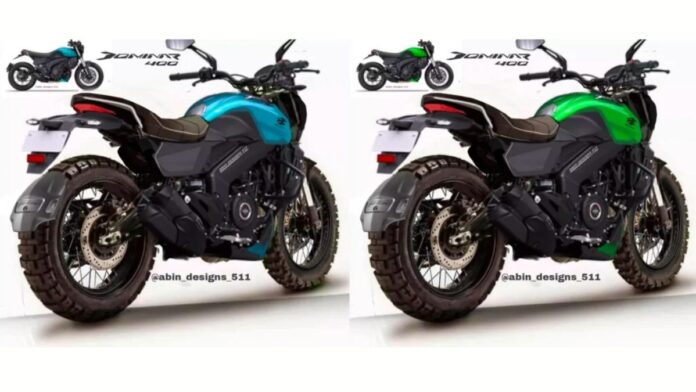 In India, the Bajaj Dominar 400 is a popular motorcycle. The performance-oriented bike comes with touring capabilities at a reasonable price. Bike enthusiasts and automotive designers continue to use the 400cc bike in their idea creations. The Bajaj Dominar 400 has now been rendered in a stylish way. Abin designs 511’s new design imagines it as the long-awaited Scrambler variant. It has a unique appearance that isn’t wholly unrealistic. Let’s take a closer look at the Bajaj Dominar 400 Scrambler that has been modified!

The sportbike concept is available in two color schemes, as shown in the photographs above: green and blue. It has a sporty appearance with a two-seat layout and cool-looking LED taillights. Off-roading is made easy with the Bajaj Dominar 400 Scrambler’s thick tyres. It includes a single exhaust with a distinctive design and finish. A robust fuel tank and engine-protecting components are featured on the attractively formed bike (the engine is also neatly tucked in). The back end appears to be sleek and modern as well. Overall, the bike appears to be strong and commanding. Will you be interested in seeing some of these components in Bajaj’s production version?

Also Read: This Is The Best-Ever Modified Model Of Yamaha R15 V3

The standard Dominar 400 is powered by a 373 cc liquid-cooled single-cylinder engine with a DOHC arrangement that produces 40 PS and 35 Nm. It has a 6-speed transmission with a slip-assist clutch. The bike has attractive 17-inch alloy wheels. The basic dual-channel ABS has a 320 mm front brake disc and a 230 mm rear brake disc. The feature-packed motorcycle weighs 187 kilogrammes and features a 13-liter fuel tank. Side mirrors with a quality appearance, a forged side stand, a double-barrel exhaust, straps beneath the pillion seat, inverted front forks, and other features are included. With a starting price of Rs 2.12 lakh, the Bajaj Dominar 400 cones are a good option (ex-showroom). It is available in two models: BS6 and Dominar 400 Accessorised. You have two colour options to pick from.