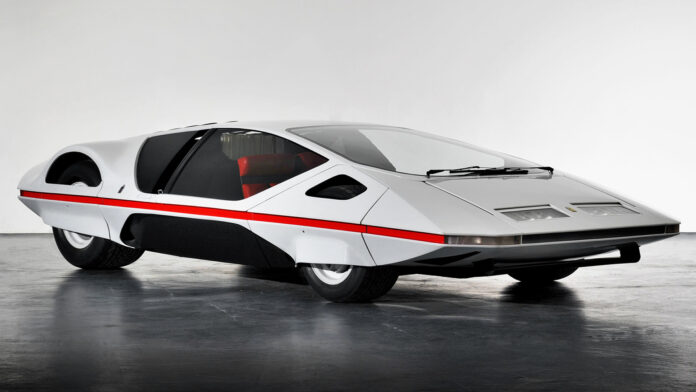 Ferrari is one of the most renowned brands in Automotive history. The iconic supercar brand is behind many of the legendary supercars. The Red colour supercars that leave a trail of their sweet-sounding engine are what we love about them. But some concept models by Ferrari felt like missteps. Thankfully they never made it into production. Let’s take a look at the top 5 weirdest Ferrari Concept cars:-

With the 512S Modulo, Ferrari created one of the wildest wedge-shaped, mad conceptions of the 1970s. It wasn’t beautiful, but it was highly futuristic. Everyone remembers this wacky Ferrari concept, even before Jim Glickenhaus brought it back to life and got it running. The Modulo and the Lancia Stratos HF Zero battled at the 1970 Geneva Motor Show for the wackiest car. We look at it and ask ourself that can any Ferrari be more unattractive than this?

Read More: Why are Most Ferrari Supercars Red in Colour?

Well, there can be. There’s the modulo and then there’s the Testa D’Oro Colani. It is a one-of-a-kind vehicle. According to Car and Driver, the car is worth $1.7 million because of its distinctive and rare features. That’s fine and all, but Ferrari should never bring the model back, considering its Spaceship-like terrible appearance. It is one of the top 5 weirdest Ferrari concept cars.

The design that paved the way for the Ferrari LaFerrari will be remembered forever. The LaFerrari is attractive, while the F150 Tensostruttura is unappealing in many respects. It appeared to be a little too amusing and more suited to space travel. Only 9 models were created, with only two of them making it to full size. Fortunately, Ferrari addressed the design issues with the LaFerrari.

You May Like:  Toyota Supra Mk4 What Makes It So Special

Enzo felt like killing two birds with one stone when Sergio Pininfarina offered a Ferrari challenger to the Mercedes-Benz 450SEL 6.9 and Maserati Quattroporte. The outcome was the Ferrari Pinin. It’s the only four-door sedan the company has ever produced. The Pinin is proof that Ferrari can build a sedan, but it isn’t particularly attractive. Its angular shape and square-like appearance are difficult to look at. Due to the fact that it did not correspond to the traditional Ferrari ideals, the four-door was eventually discarded. The Ferrari Museum has the only copy accessible.

This one was revealed right before the 1970s. It was built from the chassis of a Ferrari 312P destroyed in a crash at Monza. Finally, the car was nothing more than a showpiece that could barely move. The car had to be escorted by many people during the unveiling. According to Classic Driver, the engine included a 6.0-litre V12 from a Can-Am race car.

Ugliest American Cars Ever Made | Ugliest Cars Ever

Greatest American Cars Many Gearheads Have Never Heard Of