After a criminal spree that included ramming a Hummer into a police officer’s Ford Explorer, a 25-year-old woman was detained in Waterbury, Connecticut.

Hannah Casperson was wanted by the Waterbury Police Department after she and a man allegedly smashed into 41 automobiles on Friday, April 1. Casperson was apprehended by authorities on Sunday, and a pursuit ensued.

A portion of the chase was captured on a police officer’s body camera. The officer had deployed his police car to block off a little roadway with a dead-end, according to the footage. He approached Casperson from inside the Hummer parked at the end of the block, but she refused to give up and slammed into the cruiser.

Despite the officer’s repeated requests for her to halt, Casperson repeatedly smashes the Ford, ultimately pushing it aside and speeding away.

Casperson allegedly struck no less than eight police cruisers throughout the chase, costing $135,000 in damage, according to The Hour. The chase ended when the 25-year-old collided with four cruisers on Route 111, overturned the Hummer, and slammed into a power pole. She tried to leave the scene on foot, but was arrested immediately and sent to the hospital with a shattered femur and a dislocated hip.

Seven cops were treated for minor injuries sustained during the chase, including contusions and sore backs as a result of the several wrecks.

Waterburg Police Chief Fernando Spagnolo told The Hour the day after Casperson was detained, “This is a horrific circumstance that we just had to deal with.” “I believe all of the police involved performed an outstanding job.”

Read more: Dramatic Ferrari 488 Pista Crash Should Be A Lesson For All… 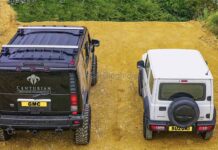