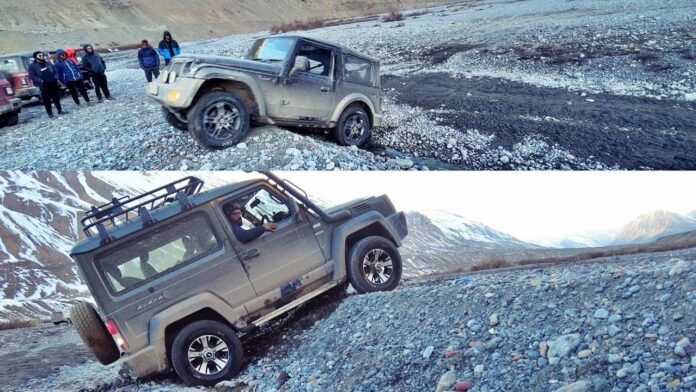 The Force Gurkha and Mahindra Thar are the two proper 4×4 off-roaders now available to the general public in our country. On the internet, people are still debating which is superior. We have a video here that shows both SUVs off-roading.

DCV Expedition has published the video on YouTube. In the video, the host is driving the Gurkha, and two Thars can also be seen. Both SUVs are driving on a rocky trail with several undulations. They also cross some streams and traverse the terrain up and down.

The video begins with the Gurkha descending a difficult path. There isn’t a single issue with it. The Thar, on the other hand, is able to cross the trail without bother or drama. We can notice how similar the Force Gurkha appears to a Mercedes-Benz G-Wagen in the video.

The Gurkha and both Thars then have to cross a brook. There are no difficulties with any of the three SUVs. Then it’s time to climb up a rough hill, which is fairly difficult because the wheels can lose traction. The first to leave is Gurkha. The front tires of the SUV rise, and the underbody scrapes. As a result, the Gurkha becomes trapped. Because all four wheels are spinning, we can observe Gurkha’s four-wheel-drive system in action. The driver then reverses the SUV and accelerates back up, as the Gurkha drives up.

Then there’s the Thars’ chance. Both Thars climbed up without difficulty and without scraping their underbodies. Then there’s another stream and slope that all three SUVs comfortably navigated.

While off-roading, the Gurkha appears to be marginally more stable than the Thar in the video. The Gurkha’s underbody, however, was scrapped due to the side steps, bash plate, and underbody protection bars.

Since its reintroduction in 2020, Thar has been selling like hotcakes. Mahindra provides both a hardtop and a soft-top convertible version of the Thar. There are two engine choices available. A 2.2-liter diesel engine or a 2.0-liter turbocharged petrol engine is available. Every model and engine option of the Thar comes standard with a 4×4 drivetrain and a low-range transmission.

Last year, Force introduced the upgraded Gurkha to the Indian market. Only a 2.6-liter diesel engine with 91 PS of maximum power and 250 Nm of peak torque is available. The engine has been tweaked for low-end grunt and is connected to a 5-speed manual transmission. The SUV has a four-wheel-drive system, a low-range transmission, and front and rear locking differentials.