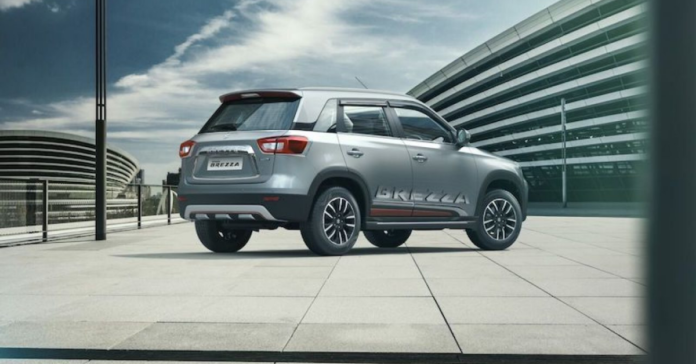 The 2022 Maruti Brezza is about to enter our market, and we’re going over the most notable features that it might have.
We’ve compiled a list of the top ten features that the Maruti Brezza 2022 could have. Images of the upcoming Brezza have been leaked online, revealing some of its highlights. The compact SUV segment is the most competitive in the Indian automobile market, with all of the major players present. Brezza is one of the segment’s best-selling vehicles, and Maruti wants to keep it that way. This new look and updated features would be its strategy to compete with the likes of the Hyundai Venue and Tata Nexon.

The updated Brezza will have a sleek and sharp headlamp and taillamp design, as well as a massive front grille with plenty of chrome. The overall silhouette of the compact SUV, however, would remain unchanged from the current model.

The updated Brezza’s interior will also see some changes to make it look more premium and appealing. But don’t expect a total makeover.

On the facelifted Brezza, there will also be a free-floating infotainment display that will take centre stage on the dashboard. For added convenience, it will include Maruti’s connected car technology.

While Maruti was adamant about not including sunroofs in its products due to safety concerns, the company has caved in to popular demand from car buyers. Because of the luxury experience it provides, the sunroof is one of the most popular features in modern cars among a wide range of people. As a result, Maruti has also equipped the 2022 Brezza with an electric sunroof.

Following the introduction of the heads-up display in the new Baleno, people are expecting it to be included in the new Brezza as well. Because the Brezza is a little more expensive than the Baleno, we can expect it to have this feature.

A 360-degree camera, like the Baleno, could be a very useful feature for the Brezza. It increases the driver’s comfort to know that he has access to the entire surrounding area while parking.

The higher trim levels of the 2022 Maruti Brezza may also include up to six airbags to improve safety. With a 4-star GNCAP safety rating, the Maruti Brezza is already Maruti’s safest car.

A 4-speed torque converter unit is available in the current model. Maruti may include a CVT transmission as well as paddle shifters for manual control in the updated Brezza.

The updated Brezza, like the new Ertiga, would get the all-new next-generation K-Series 1.5-litre petrol engine with Progressive Smart Hybrid Technology, which would greatly improve mileage.

CNG powertrains aren’t typically associated with SUVs, but Maruti may include one with the Brezza to increase its appeal and reach a wider range of customers. The rising cost of gasoline is forcing city dwellers to purchase CNG vehicles.