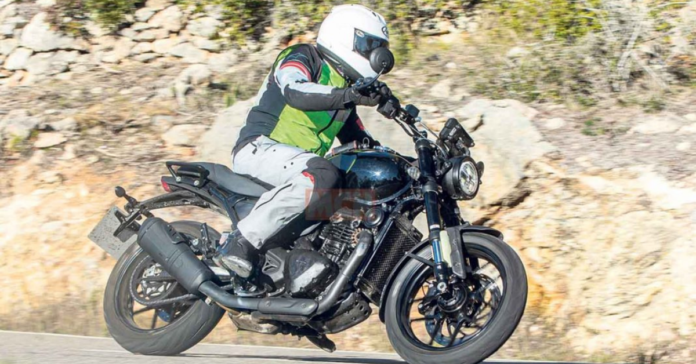 The two models of the upcoming all-new bikes from the Bajaj Auto and Triumph Motorcycles collaboration project were recently spotted testing and appeared to be nearing production form. Now, a new set of spy images has been discovered in order to get a better idea of the design and features of the upcoming Scrambler-style bike. Bajaj and Triumph are expected to launch low-cost premium motorcycles in the Indian market.

To begin, the design and styling of the Scrambler-style bike are inspired by its sibling bikes, such as the Triumph Street Scrambler and Scrambler 1200. A small round headlight, knuckle guards, a small windscreen, a tyre-hugging fender, and a high-mounted beak fender distinguish this motorcycle. Nonetheless, this bike receives a double-barrel exhaust muffler, similar to the larger Scramblers.

However, because these were only test bikes, the powertrain profile and everything else was carefully hidden, but one can still get the impression that the Scrambler-style bike will most likely get a single-cylinder, liquid-cooled engine with a vertically-mounted radiator similar to the Bonneville. The engine displacement is unknown, but we can safely assume it is less than 400cc.

In terms of suspension, it has upside-down front forks and monoshock rear suspension, as opposed to the traditional twin-shock setup found on other Triumph bikes. The test mule rides on 19-inch front and 17-inch rear wheels outfitted with Metzelers Karoo Street tyres that are capable of both off-roading and on-roading, according to the company.

Aside from everything else, we notice that the test bike has a side rack on the left, a tank-mounted Givi branded bag, and a rear top-box. Furthermore, the bike has a rectangular TFT screen, which differs from the Street Scrambler and Scrambler 1200 bikes. However, it is important to note that the bike is only a test mule and that the final bike may have traditional instrumentation.