Worst Ford Cars Ever Made 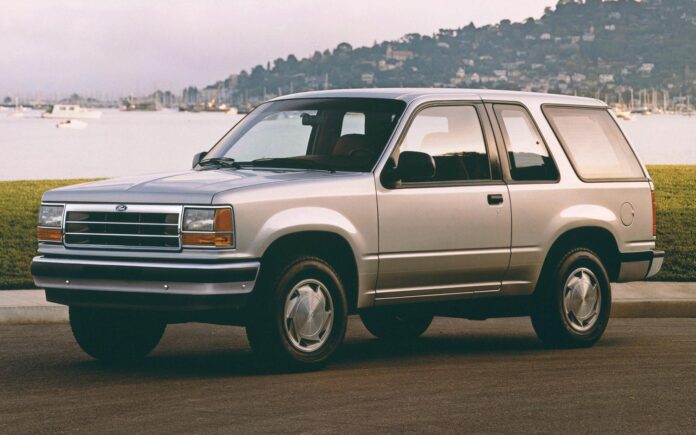 Ford is one of the most talented car manufacturers in the World. For more than 100 years, the company has been making cars satisfying both normal consumers and enthusiasts. Ford’s car catalogue consists of various cars from commercial vehicles, SUVs, Crossovers, Sedans to electric cars. Its models like Mustang and F150 Raptor have been popular with enthusiasts. But the company has also done many mistakes in past that still haunt them. Some models launched by Ford were utter disasters. They had to suffer major losses due to the same. Let’s see the worst cars ever made by Ford:-

Nothing would kick-start the list of Worst Ford Cars ever made than this. Maybe Ford Forgot that adding an exclamation mark in the name doesn’t make a car better. Norwegian carmaker Th!nk Mobility partnered with Ford to build this car. It was a complete mess. This micro-electric vehicle was cramped, impractical and extremely overpriced. What’s the range you ask? 50 miles only. No Wonder Th!nk Global declared bankruptcy in 2011.

In 1988, Ford thought of replacing the Mustang with the Probe. Well, we must thank God that this didn’t happen. Because then we would have lost one legendary model for an FWD coupe. It was not a surprise when Mustang fans objected to the absence of V8 and Front Wheel Drive Configuration. Fans also didn’t like the fact that Ford designed a Mustang Replacement in collaboration with Mazda. This made Ford work on a new Mustang instead of replacing it. The Production of the Probe was discontinued on 17 March 1997.

From its looks, it seems like the EXP is trying hard to be something which it isn’t. It looks like it is desperately trying to be cool, but not able to manage it properly. The EXP was Ford’s slowest-selling car in the compact sports coupe segment. It made a mere 70 HP. With competition as tough as Toyota MR2 and Honda CRX, the Ford EXP couldn’t stand a chance.

How do you ruin a good thing? Just ask the design personnel at Ford who (re)designed the Ford Taurus in 1996. Its Oval design was not what everyone would appreciate. That’s what happened. The redesign felt unnecessary and killed people’s interest in Taurus. Thus the sales declined slowly which made way for Honda Accord and Toyota Camry to dominate the segment.

The rear might look like one, but this isn’t what Mustang was supposed to be. It really is one of the worst Ford Cars ever made. This ugly joke is also the least fuel-efficient of all time. It shares its platform with the Ford Pinto (That car is also on the list). The design is bland and it doesn’t get V8 as standard. I think that’s enough to understand why fans and enthusiasts equally hate this car. Yeah, we agree that this was done due to the Oil crisis, but it would have been better if they skipped the model entirely till the crisis was over. Or at least gave it a different name instead.

Before renaming the sedan Version of Ford Ka as the Aspire for the Indian market, Ford had another Aspire in their car catalogue. Ford renamed the second-gen festiva as ‘Aspire’. What inspired them to name this car ‘Aspire’, we don’t know. What we know is that its performance was unacceptable. The engine made only 63 HP, while base models lacked the earlier optional alloy wheels and rear wiper !! The confusing configurations meant slow sales of cars and eventually getting discontinued completely.

The explorer is one of the most popular as well as the most dangerous Ford Cars. In the 90s and early 2000s, multiple accidents were reported in which the car rolled over due to tire failures. Due to being based on a truck chassis (The Infamous Bronco II), it had an elevated centre of gravity. This made it handle erratically in intense steering manoeuvres. Ford ended its 90-year-old partnership with tire company Firestone due to this issue. Thankfully, the later models didn’t have to face the issue.

You might remember the original Escort and ask us the question of why we included this car on the list, so we mentioned the year in the title. This model is on the list because it didn’t bring anything new to the table. Plus, it had a plain and boring styling. The build quality was poor and had a lacklustre amount of extra equipment. The 1.6-litre engine generates 88 HP which translates to a time of 11.4 seconds to reach 60 mph. It also scored only two stars from the New Car Assessment Program.

This is the car about which we talked above. The Pinto is infamous for exploding fuel tanks. Its flawed fuel tank design would cause the car to start burning as soon as it gets in a rear-end collision. The thing that Ford chose to settle lawsuits instead of actually fixing the car made the situation worse. Not only the fuel tank issue, but other issues like sticky accelerator pedals and the fuel vapours ignited in the engine air filter. The Pinto still sold over 3 Million copies despite the serious issues and recalls !!

This has got to be on the list of Worst Ford Cars Ever Made. Nothing speaks failure more than the 1958 Edsel. The word Edsel has been a synonym for failure in American popular culture. It was designed to compete with Buick and Oldsmobile at that time. Ford aimed to attract all demographics, but sadly it was a terrible mistake. Named after Henry Ford’s Son, the car was plagued by problems since its inception. Some of the problems included faulty trunk lids, stuck buttons and oil leaks. It was a $250 million project that ended up in $350 Million in losses. Ouch…